I found this dude, The Intruder at the flea market the other day. He is a GI Joe figure. From like the big ones, not from the Real American Hero line. I'm not a scholar in that area but if my memory serves he was from later down the line when they kind of tried to get away from the military theme and to recreate Joe as more of an adventurer type character, an early extreme-sports kind of guy.
The Intruder was his enemy if I recall. He was some sort of like neanderthal monster type thing. I guess. That's what he looks like to me anyway. 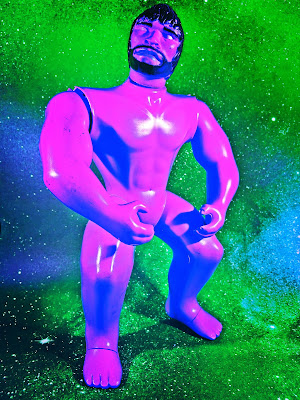 When I first started doing Space Hasbros the idea was to take pics of all my WWF Hasbro dudes but when I saw this guy I had to include him in the project. He's so weird looking in the first place. His blank eyes and weird body-type just scream Alien to me. Alien Neanderthal.
The figure comes with armor. The one that I found was naked but he cost almost nothing so I'm pretty pleased with the find. It was at a booth owned by a dude who is there on the regular but never has toys. He had a few last weekend though and this guy here was amongst them. 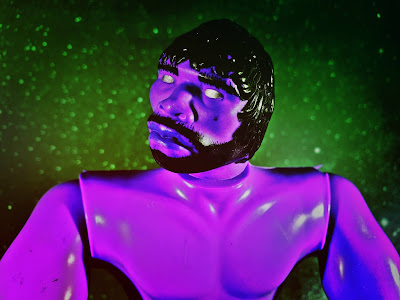 That pic up there is so creepy. The white eyes are mad scary and the way that his head tilts to the side is weird. He's not making eye contact. Even if he were it'd be impossible to tell what he was thinking. You'd just be looking into two blank marbles.
The figure has an action as well. If you push a button on his back his arms squeeze together in a super powered bear-hug. It's cool but it required Hasbro to keep his arms in some weird cave-man type arm pose which would limit his play-ability but it does add to his weird appearance. He's always getting his flex on.
70's GI Joe Hasbro Space Hasbros Toy Pic