Toy Pics: Mekaneck From The Masters Of The Universe Toy Line 1984 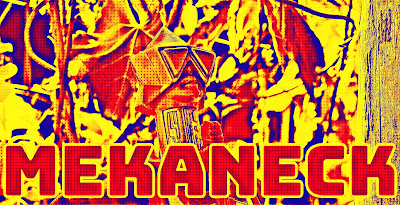 I picked up Mekaneck on Ebay the other day. He was relatively inexpensive which is right in line with my spendthrift toy buying philosophy. That's my fancy way of saying that I am cheap.
For whatever reason Mekaneck is one of the less desirable figures. The reason behind that is a mystery to me. I mean, look at him. His neck grows. He's amazing..
Meka was one of the dudes that I recall having as a young sprat. I would turn his waist and pop his neck up over and over again. This led to the elastic band in his waist getting limp which much like a GI-Joe figures O-Ring is the key to him remaining upright so lost the ability to stand on his own. He became mad bowlegged.. 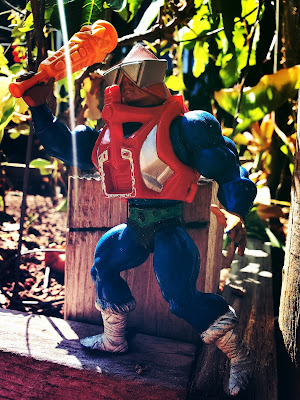 I took these pics out in my garden near the tomato plants. We're getting toward the end of the season so the plants are already all picked over and look all bombed out but IDK, I was too lazy to like set up a cool background and move him all over the place.
Taking good pics of your toys is a hard nut sometimes. First of all you have to find or create a convincing backdrop for the image and then you have to get the figure posed in a way that looks lifelike or interesting.
That is particularly difficult with 80's figures. They don't have the articulation that modern figs do. Good old Mekaneck there has what? 5 points of articulation AND he has wobbly bow legs? I feel lucky to have his stand up on his own. 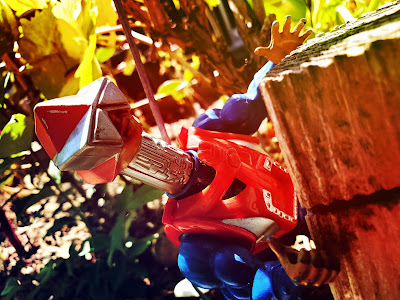 His neck is really cool though. One has to wonder where it goes in his body when it is pushed in. I imagine that the horrific surgery that Man At Arms performed on his damaged body, the very surgery that turned him into the heroic Mekaneck must have involved removing his innards and replacing them with robotic parts that contour around his long metal neck.
Anyhow, I hope that you enjoy these pics and that you enjoyed listening to me talk about good ol' Meka on Worlds Famous the other week.. I'll include a link below in case that you missed it..
RELEVENT LINKS.... Worlds Famous Ep.11: The One Where I Talked About Meckaneck. HERE!!!
80's Mattel MOTU Toy Pic