Get Big With Bruno! The Sammartino Way To Get Huge. 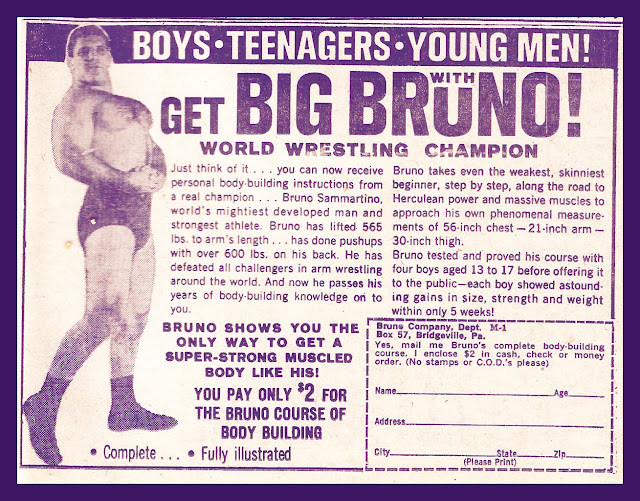 I picked up a comic from 1965 the other day in a dollar bin raid. It was Sgt.Fury, like the WW2 version not the Steranko Spy version. Both are a fantastic. Anyway, I was skimming through the book and I came up on this AWESOME Advert! I just had to scan it in.
Back in the day Bruno was like legit one of the strongest dudes in the world. He had like a 500 lb Bench Press back when that was unheard of. I mean, even today that is INCREDIBLE but back then it was considered impossible but Bruno could do it.
Me and my brother used to call him Bruno Samarr-Tummy with the emphasis on tummy. We thought we were super funny. We prolly were for the standard of the time..
The program costs 2.00, the way I always hear dudes talk about the 60's to Now exchange rate that seems like a million dollars. Honestly when I was coming up Mail Away stuff was always too expensive for my blood.
I don't think I ever actually ordered anything from a Comic Book. I wish I had but I didn't have a lot of cash as a kid and the 6-8 week shipping time seemed like forever and I usually just ended up getting a Chunky Bar or something...
60's comics Marvel Scans Wrestling WWF