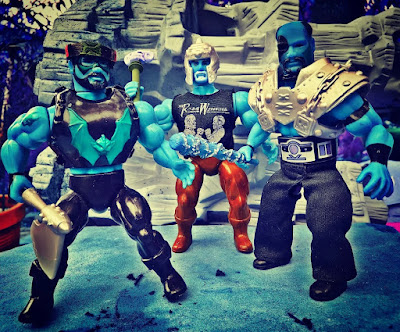 I came up with this idea of converting some of my AWA Remco figures into He-Man characters like Mattel has recently done with some WWE Characters. IDK, it seemed like a nice way to spend some time.. I have a lot of spare time on my hands lately..
What I did with these guys is more properly called kit-bashing I suppose. For Animal I took a spare armor from Hordak that I had laying about and paired it up with an axe from Ram Man along with a leg piece from some rando Fortnight figure I found at the flea market as a head dress. It came off the figs leg but fit pretty well on Animal's head.
For Hawk I took the shoulder pads off of a Masters Of The WWE Universe Bill Goldberg and gave him a barbwire baseball bat from a Cactus Jack figure I've had for years.
Paul Ellering has Goldberg's helmet and a Havoc Staff from a mini Skeletor I had here in the office. I think they all came out pretty cool. I'm happy.
I made them blue colored with a photo-app on my phone.  I guess I felt like it made them look more Eternian. The jury is still out on that one.
Related Links..
Toys R Us Report Ep.13: AWA Mat Mania by Remco... HERE!!!!!
80's MOTU Remco Toy Pic