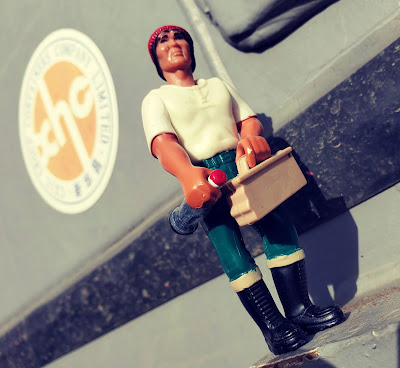 I really like this dude. I love how just over it his face appears. I mean, dude has been going to work on boats forever and he's seen it all on the deep blue sea. Nothing surprises him but at the same time nothing thrills him anymore.
Dude is wondering if maybe he should have stayed in the port with Brandy when she sent her desires his way. He probably should have. Love is hard to find and we all now that Brandy is a fine girl... 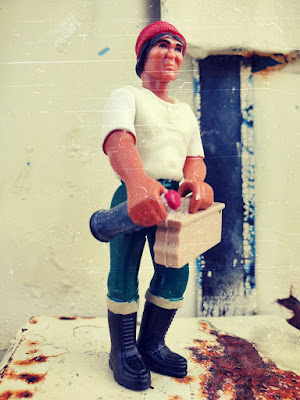 I took these two pics over at the middle school. There are a few really bombed out storage containers that look like they could have spent some time on a sea vessel. I like the orange rust on them.
I don't remember where I got the dudes lunchbox from. It was probably intended to be some sort of ammo box that came included with a dollar store soldier. I base that on the lack of any sort of decorations on it. The soda is some sort of doll house accessory.
I am in love with Fisher Price Adventure people. I like how they cover so many different professions and so many different races. This guy looks vaguely Native American to me but IDK. It doesn't really matter. He's cool no matter what. I like his Steve Zissou style red cap.
70's Fisher Price Toy Pic