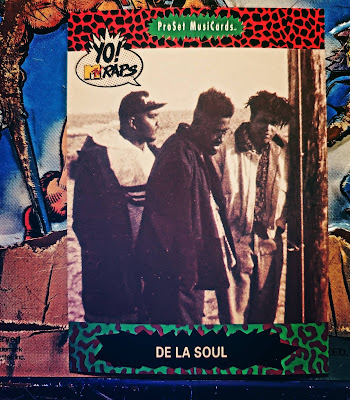 I opened up a pack of Yo! Mtv cards on the last episode of Worlds Famous. I'll link it below. Anyhow I opened up the pack and got this very cool De La Soul Rookie Card.
Why is it the rookie card? It's the lowest numbered De La Card (13) in the set so it's the 1st actual card ever of all the times and space of De La Soul. Ever.
It's not worth anything as far as money goes but it's really cool to me. I'm a huge De La fan. Like huge. I love them.
My fave record of theirs is prolly De La Soul Is Dead right now but some times it's their 1st one and for a long time it was their 3rd one but right now it's DSID. That's their second one. 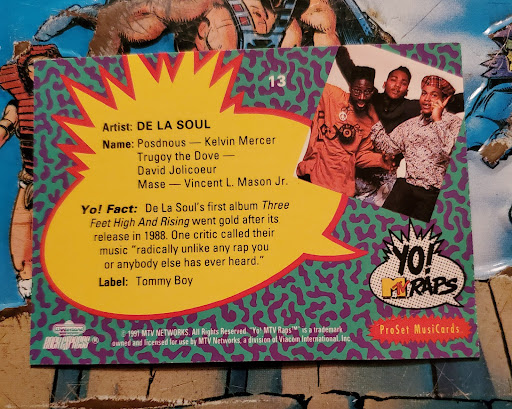 That's the back of the card. It's surprisingly informative TBH. I like how it lists the 3 members of the group and also lists their government names. This was back before Wikipedia or whatever and info like that wasn't super easy to come by.
I think overall I opened 3 packs of cards before getting this one. That's not bad. If you get a pack or 2 of the Yo! Cards I feel pretty confident that you'd get some Hip-Hop Hall Of Fame Rookie Cards but they would only be worth like 50 cents.
That's cool though. The best things is when things that you like are for sale for pennies on your nostalgic dollar.
Related Links...
Worlds Famous Ep.7. The one where I open the pack of cards that got me that card up there. HERE!!!
90's Hip-Hop Trading Cards