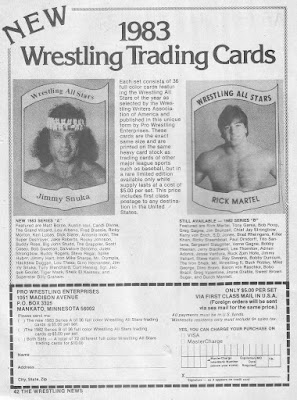 I'm sorry that this scan didn't come out super clear but the magazine is all scummed up. It has a pretty strong mold smell and is all wrinkly. I'm more than likely going to toss it after I'm done scanning in some of these weird adverts.

I remember seeing this advert in a bunch of wrestling mags of the era. Your PWI's and such. I was into sports cards and wanted to get a set but never did. I had bad mail order follow through. I'd want to order stuff but could never get the act together to do it.  I wish I would have followed through on this one though. This set can go for big bags on the card market!
The set was the 1st wrestling cards in a long while so for a lot of the dudes you see listed there, those are their rookie cards! There is a Hulk Hogan rookie that I've seen go for a thousands of yams and there is a Ric Flair rookie that goes for the same!
Right now as we speak there is a complete set of these, the original set and the harder to find update set for 25K! Take a look HERE! It's Ebay. Link could go dead whenever so be aware..
Over the years of collecting I've had a few of these guys. Not the Hogan of the Flair though. Some of the other ones. No one valued wrestling cards BITD so you could pick stuff up for pennies.
The rub is that I didn't value wrestling cards either so I ended up tossing all of it over the years...
I guess that's why they have value. To be valuable in the collectible game it's almost like you have to be worthless at some point.
Related Stuff..
The Baron Claw Shirt Scan....
80's Scans Trading Cards Wrestling