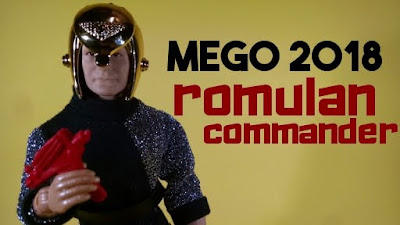 The Romulan Commander is a 3rd Wave Mego figure. He's one that a lot of dudes were looking for for a quick minute. I was lucky enough to find one like the 1st or 2nd time I went on the hunt for Wave 3. I found him and I also found The Cowardly Lion. I was really in lust with The Werewolf from Wave 3 but he eluded me until I finally got up on him on Target's website..

I'm determined to get all of the new main story-line Star Trek releases from Mego. I dig the Mirror Universe ones too but man, I've already got a pretty big Mego habit and I don't want to get in any further.


This guy here is the commander of the other Romulans. The way that you can tell is because he has that dope golden helmet. It's pretty great and while it was pretty difficult to get off of his head the 1st time out but after that it's pretty easy to get it off his dome piece.


Without his helmet on he looks like he could be Spock's cousin. I guess in a lot of ways Romulans and Vulcans are cousins of sorts.

The commander comes with the standard Starfleet phaser and communicators but these ones are red to match his outfit. They look pretty nice.

Overall I think he's pretty great. The head-sculpt is pretty on point to what a Romulan looks like I wish he had some Romulan weapons but using the same pieces over and over again is sort of a Mego trademark. It's part of their charm.

I have the old school Mego Bridge and as I get new figures I add them to the playset. It looks like there is an alien invasion of The Enterprise. Since Mego relaunched they've added a few Star Trek Villains. There is an all new Gorn and with the addition of the Romulan Commander my little Bridge playset is starting to look a bit overrun.

Man, I'm just so stoked to have Mego back in my life. I get so jazzed going into Target and seeing Mego figures on the pegs. Who would have ever thought that would even be possible?
Mego Star Trek Toys