Remco Mini-Monsters Play Case. My Wife Found This At The Toy-Con!

on October 18, 2018
I have to give all due credit to The Wife for finding this goodie at The Santa Rosa Toy-Con a couple weeks back. She got a great price too. After she found it she came up to me and was all like "Here you go. I bought this for you. You like monsters" I do like Monsters! and I do like this case a lot.

It crosses a couple of my toy likes.. I dig monster toys, I dig toys made by Remco and I dig carrying cases. This is all three!

I am aware that the hatch that Dracula is coming out of is meant for The Mummy. I just liked how Drac looked coming out of it. If he wasn't in the tomb then it just looked weird with him hanging around in the back. Drac has to be in the forefront or he shouldn't be there at all. That's my opinion. I know some dudes out there who like The Mummy, like him a lot. 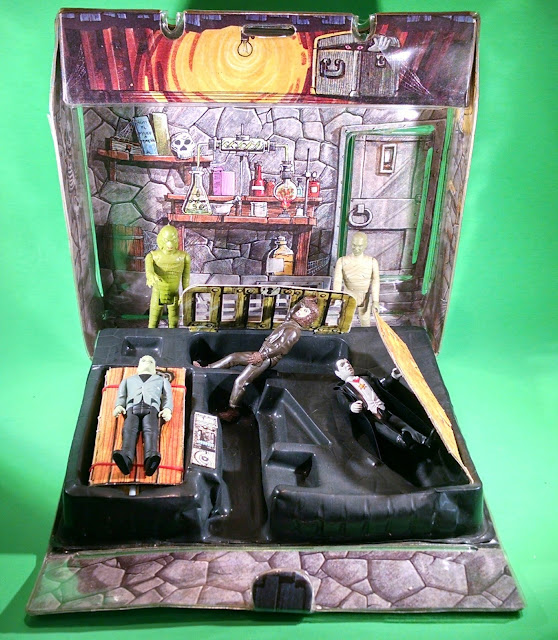 Of the figures in the "photo-shoot" only The Wolfman is original Remco. He came with the case making it more of a bargain. The rest are Super-7 Re-Action figures of the Universal Monsters. They are on the same scale and fit nicely with the case.

I really like how Wolfie up there has blood all around his mouth. What a gruesome detail to add onto a kid's toy. Gruesome and Awesome!

Remco never made The Bride in their set and since she is one of my fave Universal Monsters I wanted to include her in on the fun. I think that she appreciates being thought of. Who doesn't right?

I don't really know what the glow in the dark features are.  It might be that by now they've lost their glow. It's a pretty old paint job. Anyhow, it doesn't need any glow to have my love. I love it a lot and will continue to do so for years.

I have it set-up in the living room now with the Halloween stuff. I think that I'm going to keep it with the holiday stuff so I only see it once a year. That way it will retain a real special vibe for years and years to come. It would have anyway but this way it'll prolly last forever..