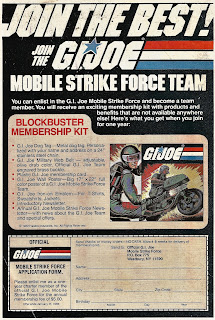 I scanned this off of the back of a comic that I grabbed from The Batcave over in Courthouse square. Dude has a pretty fair collection of dollar comics. Dang it, I remember when dollar comics where quarter comics! That was how I got in the comic game, through 25 cent books.. anyway, I was over there and I grabbed a copy of Team America which was this Marvel comic about a moto-cross team. it was based on a toy line from Ideal. An underrated one if you ask me. I should do an episode about it. Remind me to do that.

Anyhow, I grabbed this copy of Team America because it had that awesome GI Joe Fan Club Advert on the back. I was into fan-clubs but never actually joined one. In retrospect I wish I had because the stuff you get seems really neat but on the other hand I would have lost it by now anyway, but still.

Out of the stuff you get from this the stuff that I'm most interested in is the belt and the newsletter. The letter was prolly a bit basic but a belt? That is so weird and I want it super bad now.


There it is. From what I can gather you can get one for about 30 bucks on ebay. That's not too bad really. It has to be considered a somewhat rare item. I wonder if it was fan club exclusive or if they offered it in some other fashion later?

The detail on the buckle is really nice. They outdid themselves there. If I got one of these now I'd find a belt the same color, because you know it has to be super small and kid sized and I'd put the buckle on it and use it as my casual belt. It's really great.

Here is a shot of the membership card from YoJoe.com which is an invaluable resource for Joe Fans. I wasn't able to find a picture of the iron-on emblem. They prolly all got ironed on to something but I imagine that it was a standard Joe Logo. Nothing wrong with that.


That scan from the newsletter is from 3dJoes.com which is another amazing Joe Site. I go there just about every day for my Joe fix. Great site.

I like this page because it offers rebates for team members. That's nice. That's a discount on something that you already bought. Can't beat that. The rebates seam a bit chintzy if you look a them. I mean, 25 cents off on a RAM Cycle? Sure you can buy a used comic for that price but it's not really a lot of money but you have to consider that The Ram prolly cost like 3.99 or something.
GI Joe Magazine Scans Scans