Hey kids it's me. I've been saving up a few of these little Video Store Labels waiting to get enough to get a decent post out of. I think I'm there. IDK, I might be. No, I am. This is enough.

I really like the stickers on the tape that show the name of the store and where they were located. I guess what gets me is that each one of these was probably a special place for someone. Each one might have been someone's favorite Video store.. On the flip they could have been someone's least favorite store too. There is a special place in our hearts for the worst store too though. It's almost the equal to the best in a certain way. I guess that way is wackness but, whatever.

Let's start with this one here. I like that it's from Arizona. I wonder how a tape made it all the way from AZ to The Dig here in Santa Rosa. Someone prolly moved. It's not that big of a mystery but it's still fun to think about. I also like the font that says Video Update. It's futuristic. 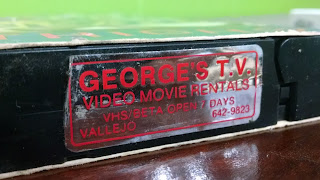 I dig how this one is a Video Store in a TV shop, George's TV Shop, Vallejo. V-Town is maybe an hour or so from here. It's where Six Flags is. The one that used to be Marine World: Africa/USA and had a ton of animal exhibits but is now Roller Coasters mostly with a few animal shows. It's fine either way.

Anyhow, this is an older sticker. I think so anyway, it shows how they have Beta as well as VHS.
You know, they are all older stickers huh? I lose track of time like that sometimes. Even though I know it was it doesn't seem like 25 years or more since stores stopped carrying VHS.. 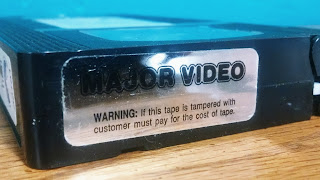 UPDATE!!! IseeRobots reader Rob was able to provide us with a pic of a real life Major Video store!! Take a look..! Big Thanks to Rob for hitting us up with this! 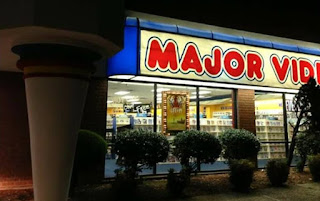 See how it says that you have to pay for the tape if you tamper with the sticker? Well that's cuz dudes would open up the case and switch the reels with other movies. No, for real. People did that. So if the sticker was messed with someone prolly stole whatever movie was and replaced it with a blank tape or something. 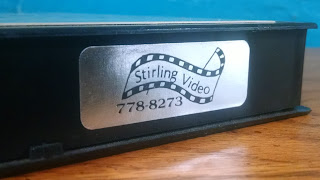 With this one I'm guessing that it's a video store, or THE video store in Stirling California. That's a ways away from here. To be honest this isn't the most thrilling video store sticker. It's kind of clip-art really. IDK. It does the trick though. It has the number at least so if you need some info or whatever you can give em a buzz.

Alright so there you have it. I don't really know the best way to finish this out. I guess I'm just gonna bid farewell and say hey, take care of yourself and if you have a video store in your neck of the woods then you should go there. Make a day of it, buy something. It's not a museum.
VHS Video Store Stickers