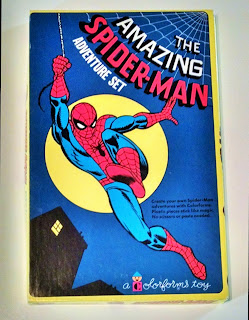 I had a super great day at The Dig yesterday. I found this Colorform set, dude, I actually found two of them and combined them to make this one almost complete set. On top of that though I found some Starlog Magazines, including issue #1 and a few others inside the 1st ten issues as well as some early Star Trek Fanzines. I love Trek so those are awesome  and I can't wait to check them out.


I had a ton of different Colorform sets as a kid back in Illinois. I had like Smurfs I think, and some Marvel ones, Snoopy, The Muppets and I don't know, some other ones too prolly. They were pretty cool but also boring. It's one of those things that show you how starved for fun that we were as kids back then.


I think the hook was that in a way they sort of acted as action figures for things you might not have had figures for. While not as dynamic as a figure you could still sort of use a vinyl cut-out of Spider-Man as a fig of sorts. Sort of. He has less points of articulation though. Like none. Zero.

It beat nothing though and with some of these properties there weren't figs available at the time so these were all you could get.


The art for Spidey is kind of neat. It's if not Steve Ditko it is at least Ditko inspired. His Spidey is my fave Spidey. Ditko was the man when it came to Ol' Pete Parker. He invented him I guess so it stands to reason.
There is a small comic in the manual. It's made up of Colorforms. Is that what you were supposed to do? Tell comic style stories? I always just set up battles and removed the people from the board when they bit the big one. I used to draw battles on big sheets of paper too and I'd erase the dudes off the page when they died until there was only one guy left on the page. I was way into drawing and acting out war. I think that's pretty common though.
Flea Market Marvel The Dig