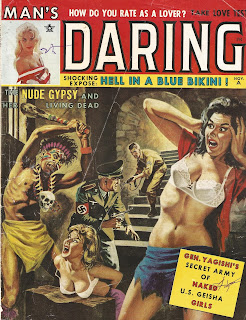 I was reading up on this style of magazine a bit and it seems that the genre is called "sweats" I'm not to sure why. Is it because they give you the sweats because they are so scary/sexy? I know not. That sort of makes sense I guess. I feel a bit sweaty looking at it. It is a big muggy today though. Not warm or anything just muggy. That's prolly like what it's like in the dungeon that those two gals are in. Muggy and gross.

This cover is wild! It looks like the scary headhunter is working with the Nazis. I wonder how that came about. Also, why are they gonna chop that gal's head off? Just because they are mean I guess. It's a good thing that that soldier is on the way down to help out. What a hero.

The year of the magazine fell off the side of the paper. From what I can tell Men's Daring was published in the 1960's.

Man, that chick in the front looks mad scared. Who can blame her I guess. Also, I want to know more about this naked army of U.S Geisha Girls. Why are they from the U.S? Is Gen. Yagishi American? Maybe but I kind of don't think so. As far as I can Google there is no such person. Is it a fictional tale? Prolly. Why would I think that it was anything but? I'm such a mark