I've wanted this figure for a while now but I've never seen it in any of the stores around here, like ever. Seriously not even once. It was going for like 30 bucks on ebay which is a little rich for my blood. I sort of looked around for awhile and managed to find some dude who was auctioning her off with a starting bid of 8 bucks. 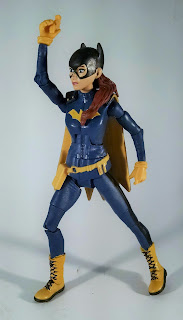 I think it's a good looking figure and I'm a big fan of the costume design. I read her comic for awhile and while I did like it the book didn't make the cut when I did a big subscription purge.

It was good but it and me never connected. I don't know. I like I like how she looks. It's like modern but also retains a classic feel. You know she's Batgirl when you see her. 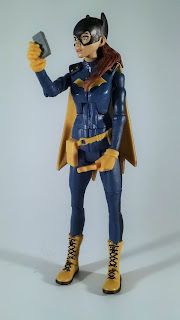 She comes with her phone which was one of her major weapons in the comic and a Batarang. I also like how she is designed after the drawing of the character as opposed to making a more realistic version. That is sometimes off putting to me. Have you seen the Supergirl one of these? She looks like Melissa Benoist but in a creepy way...

Overall I'm pretty pleased with the purchase. She's fairly poseable which not all figures are. She's a bit more moveable than say a Marvel Legend.  She's 6 inches tall. I prolly should have mentioned that too.
Batgirl Mattel Toys