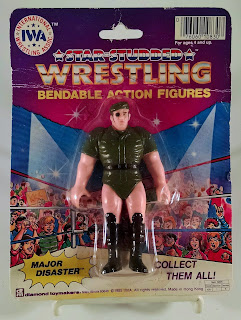 Super stoked! I picked up this IWA Star Studded Wrestler, Major Disaster in a trade with a stranger on Facebook. I had a different guy that I got at the Santa Rosa Toy Con but he wasn't one of ny favorite dudes. It was The Russian Wolf.

So when I mentioned during a posting on a wrestling figure group that I had the Wolf a fella messaged me and asked if I'd be willing to trade for a Major Disaster that he had doubles of. I was totally interested.

So, anyhow are you familiar with these dudes? BITD, and even still today I was crazy into wrestling and I'd pick up just about anything wrestling related that I could afford. Do you remember how at the Toys R Us they had an aisle of like lower quality or lower priced action figures? Like Eagle Force and whatever Remco had out at the time plus No Name Fare type stuff..? These guys were found there. As I recall they were also fairly cheap. Which was a concern for me, a kid on a budget.. Here is a pic of the back of the card where you can see The Major's bio and such. 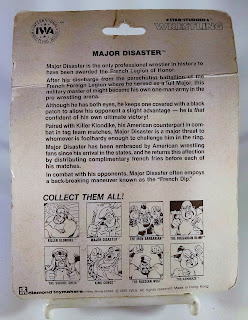 I liked how each grappler had a backstory. That raised them over other random wrestling figures of the time. It made them seem more important. More real.

I believe that I actually had every dude. I recall getting a multi-pack that had 4 dudes and that I picked up the other ones individually. There was also a ring but it was like 20 bucks and way out of my price range. 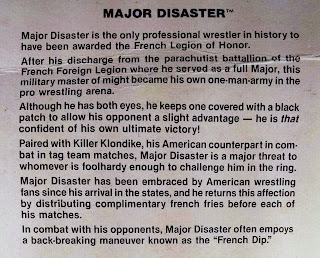 Major Disaster here was one of my faves. He crossed over into my GI Joe Universe and acted as a mercenary for The Joe Team.

I imagined that he was like a super tough master of unarmed combat. He also engaged in some classic fights with Cobra's boxing instructor Big Boa in my yard.

I actually built a small ring out of a piece of wood, some long nails and giant rubber-bands. They'd break all the time.

I ran a small circuit with The Major, Big Boa, Sgt. Slaughter and some other figures that I thought were tough, Remco Mr. Miagi too if I remember right. 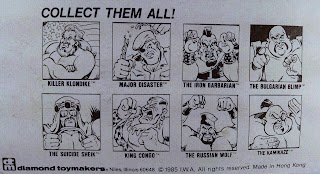 Here is a nice pic of the rest of the dudes. Overall The Iron Barbarian was my fave. This was back in The Mad Max days where Punk Rock dudes where super scary so he really grabbed my attention. He also crossed over into my personal GI Joe Universe. He of course joined Cobra and was a Drednok of sorts before I had Zartan and his crew.

I actually had The Iron Barbarian way after I'd gotten rid of a lot of my childhood actions figures, most of them were real haggard. I wish I still had them but also wish that I'd taken better care of them so that it would have been worth keeping. Anyway, I held onto The Barbarian forever. His punk rock stylings earned him a place in my house amongst my early 20's knick-knacks.

I actually don't remember when he disappeared. It was one of those things where one day you notice that something that should be there isn't there but you also realize that it's pointless looking for it because it'd probably been gone for quite awhile. My guess is that a guest or a friend of a guest swiped him. At the time there were a lot of weird fools rolling through my pad. That's like everyone's 20's I'd imagine.
80's Toys Wrestling