Vic Sage and Time-Cop In A Castle Rental's Video Section 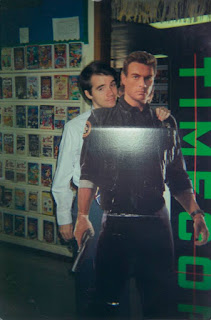 Here is a fantastic pic for you too look at. Dude, what a snapshot.That's my pal Vic Sage from The Saturday Frights Podcast and Time Cop himself Jean-Claude Van Damme!

Time Cop is so much cooler than Robo-Cop BTW......There I said it. Are you happy now? You pushed me into a corner. I didn't have a choice. It's just the truth.

Anyhow. This is a pic of Vic from back in his video store days. The name of the store that he worked at at this time was named Castle Rentals. Weird right? It sounds like they rent castle's to rich aristocrats doesn't it?

According to Vic they started off as an electronics type store but eventually moved into video rental. Just about everyone and their mother was renting videotapes at the time..

Look at all those clam shell style Disney Tapes behind Vic. When you think about it it's sort of weird that they stood JCVD right there in the kid's section, isn't it? It seems weird to me but whatever.It's not like Jean-Claude is a bad role model or anything..
Video Store Pics