Classic Episode Repost: IseeRobots Show Ep.11.. The Top 5 Trick Of Treat Candies Of All The Times.... 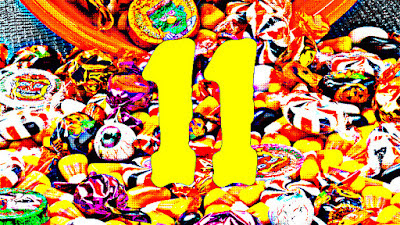 Hey kids! We're taking a little break this week as we head into the conclusion of Season One Of Worlds Famous.. Don't worry though.. We have something fun for you. I blast from the past episode.. Let's see what we had to say about this one at the time...

Hey kids. We have a real humdinger of a show this week! We're doing two of the things you guys seem to like me to talk about the most in the same feature! We're gonna talk food, AND do a Top 5! Plus, it's Halloween Related.. The Top 5 Halloween Candies Of All The Times! It's gonna be great.

Before we get there though we have to pass through some somber space and confront the passing of Robert Forrester. I was lucky enough to meet Mr. Forrester once and I really wanted to share that story with you guys. He was a nice dude.

For At The Movies we're gonna take a peek at a horror comedy called Zombieland: Double Tap. It's a sequel to a movie that came out ten years ago.. I don't know. We'll talk about it in a spoiler free way.

Then it's on to the Main Event.. The Top 5 Trick Or Treat Candies Of All The Times. This is a pretty fun one. Basically the idea is, when I was sorting out my post Trick Or Treat winnings what were the candies that I gave the highest priority to...? Which ones did I either eat first or save for last? It's a ton of fun.

For the final segment of the show we talk the recent blackout, Megos, Halloween decorations and a bunch of other cool topics.

Thanks for tuning in. Have a happy/spooky Halloween and make sure to tell a friend...