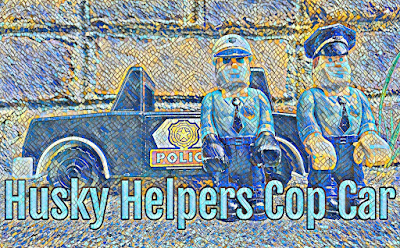 When I was younger way back in my Illinois Days I had tons more Husky Helpers than I did Adventure People. Husky Helpers are the Duplo to Adventure Peoples lego in that they are intended for a younger audience and are scaled accordingly.
Your Husky Helper is thicker and nigh unbreakable but still the same size as the Adventure Person interestingly enough.
The reason that I had more Helpers to people was an age thing really. When the helpers came out I was 4 years old and right in the age bracket for something of that sort. I recall that I had those cops up there as well as a fireman set and some construction workers.  The Husky Helpers followed in the mold of Adventure people and had the figures representing real life occupations. I've always appreciated that. 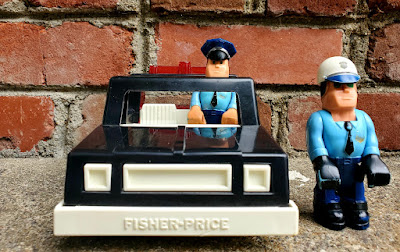 Over the years I've found several Husky Helpers figures at the flea or at the dig or whatever but I hardly ever come across the cars. There is a police car, a firetruck and a construction vehicle with a hook. I kind of want them all so when I bumped into this police car up there at the flea the other week I was pretty stoked. If I remember correctly he cost 5 bucks and the fig was a couple more dollars. I think of it as money well spent. 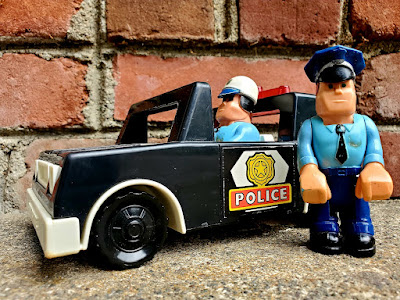 I took these pictures out in my front yard. The driveway to be exact. They aren't awesome or anything but the Helpers aren't the most charismatic figures and to be honest getting a nice shot of them is difficult. In a way it's perfect though. The Husky Helper isn't a flashy dude. He's a worker. He's husky and sure he'll pose for a picture if you want but he's barely going to smile and he's not going to lift his arm or wave. He's all business.
Just looking at these guys take me back to hanging out in my backyard in Oak Lawn. He helpers hung out with my Star Wars guys and being as durable as they are they carried onto my GI Joe Days. I imagined them with their sturdy physiques to be like super strong, like circus strongman strong.
In my imaginary world they worked with The Joes and were always there to lift a car off of Duke or to rend a Cobra trooper limb from limb if the situation called for it and it often did.
Big shout out to The Husky Helpers. History might remember the Adventure People a lot more than they remember you but you will always  have a special place in my heart...
Related Links...
Worlds Famous Ep:14. The One Where I find The Husky Helpers. HERE!!!!!