I find things all the time when I'm out walking the dog. I have a habit of looking down at the ground. I'm afraid to hit some uneven sidewalk and go ass over tea kettle as the say. Anyhow, I find things when I'm out there staring at the ground.
What did I find this time? It's kind of cool actually. I was walking right? and I came across a small piece of paper folded up in a triangle like in that finger football game we used to play back in Junior High. That's what I thought it was, one of those footballs but what it actually was was far greater than that. It was a handwritten contract breaking down the rules one had to follow to be part of the Cool Kids Club. That's what it said on the outside of the triangle. The Cool Kids Club.  Here is the 1st set of rules.

The club wants a lot of your time. They need to see you every break. There are three breaks right? Morning, lunch and a brief interval near the end of the day. That's a lot of meetings man.
I'm not sure about the next part, "Redraw Mark/Mary? Everyday" I'm not sure what that means but if you have a clue hit me up.
Next part say that the meetings take place while laying in the shade and looking at the ceiling. I'm down for that. I love to lay on the floor and look up. Maybe I could have been a cool kid and just never knew it.
Finally the last part of the first part is that: New Members must be talked about before inducted. That's totally reasonable.

So, the next part starts with the rule that you must notify us if you plan on missing a meeting. In the days of smart phones that is nowhere near as hard as it would have been BITD. You'd have to like literally find someone IRL and tell them you couldn't hang. That could be rough because basically if you find them that does sort of mean you can hang. The breaks aren't really long enough for you two do a couple of different activities..
The next part is a little controversial. You have to, before every meeting walk around looking gay. That's a little bit insensitive but being dumb kids I'm going to give them a pass and hey, who knows? Maybe they mean walking around looking gay as walking around and looking cool. I live in California so it could go either way honestly. We're accepting of everyone or at least we try to be. Let your freak flag fly is practically the Nor Cal motto...

Finally we have the signatures of the power duo atop the club, Noah and Jordan. Shout out to them. At the bottom is the document in it's entirety. I'm honestly pretty happy to have found this. It's such a genuine slice of what childhood is actually like. I remember making a grip of similar contracts. Basically because I had to get a notarized signature forcing people to hang out withe me under the penalty of litigation I wasn't a super popular kid..
Thanks for joining us and following along with The Cool Kids Club Contract Deposition.. 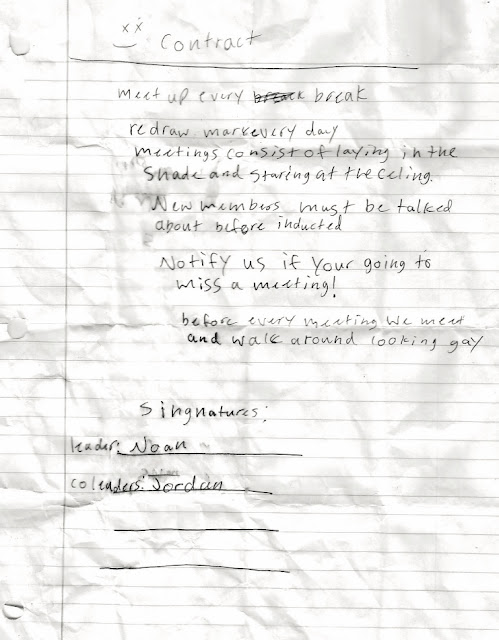