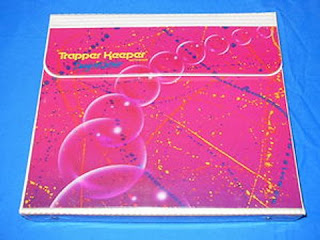 I bought a Trapper Keeper from my man Alan at the Mojo Sales Flea Market the other week. It sucked going because I had the flu but dude, you gotta go no matter what. The day you don't go is the day that the thing you've been looking for forever is gonna be there. That's just how it works so ya, I went and found NOTHING except for a beat up Trapper Keeper with pink bubbles on it.

It's cool but ya, IDK man, I've seriously been wanting to find a Trapper for days and never do so there is that but the one that I found isn't really one that I want. What are you gonna do though? It totally beats not having any Trapper Keepers right? But here's where it gets fun. Sort of. Inside of the Trapper was a folder with a pink 10 speed bike on which is dope enough but inside of the folder was this.. 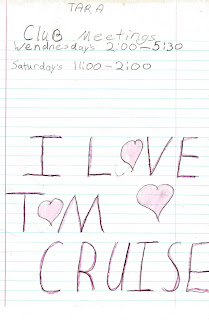 The official front page of the I Love Ton Cruise Club Club Meeting Date sheet. How cute is that? I mean come on. This 80's gal named Tara was in love with good old Tom Cruise! This is the early Cruise. The Top Gun, The Risky Business/Outsiders/Taps Cruise. The one that was a dream-date and not yet all stunk up from Scientology. He was the man and Tara knew it. 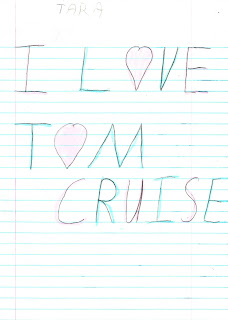 This was in there too. I guess it was a test cover or something. It's a wonderful work of art at the very least. I love the color scheme and the little hearts. Just totally real and really sweet.

Tom Cruise was SO the man back in the day. Nowadays he's kind of the man but is also mostly a weirdo so even when he makes a good movie like the last Mission Impossible (ROGUE NATION!) it's hard to look past how weird he is..

Back in the olden times a dude like Cruise who was prolly weird from the jump received a bit of protection cuz of how dope and popular his flicks was. Also, IDK if he was into that Hubbard stuff in the 80's but come on, even if he wasn't into clocking Thetons dude is a total weirdo.

I don't really think he's weird in a bad way mind you. He seems like a pretty nice, fairly cool but also SUPER intense and sort of out of touch dude. It's prolly a bit off-putting but I do think that he's pretty much well wishing and not bad or shady in ANY WAY. I would be SHOCKED to see Cruise in a scandal of any sort. SHOCKED!

I wonder how Tara feels about TC nowadays? I wonder if she has strong feelings in any directions? I myself feel sort of embarrassed about the people I had crushes on in my youthful days (Morgan Fairchild, Erin Gray etc..) Not like emberassed but IDK, it seems so long ago and so weird. Youthful crushes are a strange sort of thing.

I'm really glad that I got up and went to The Flea. I'm glad that I found this. It makes me sad to think that these pieces of the past could have very easily wound up in the trash.

I guess in some ways I'm a hero for fighting the flu and going out. In most ways I'm not a hero so it more than balances out in the end...Thanks for taking the time to read 600 words on Tom Cruise and Trapper Keepers..