Really Cool Masters Of The Universe Presto Magix! Rub-Offs by Colorforms! Circa 1983 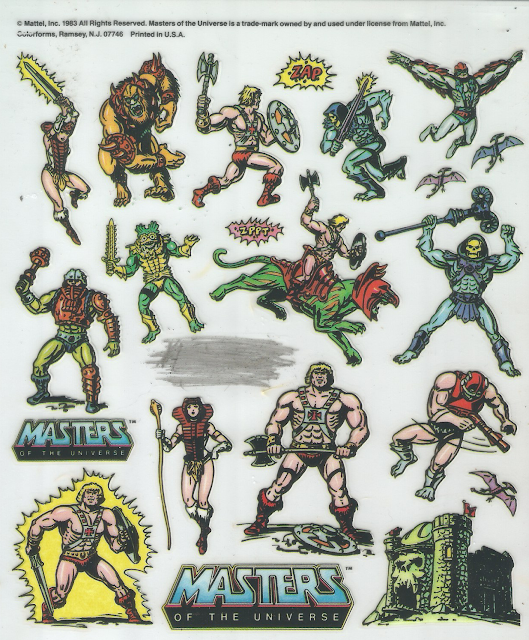 Remember these? You'd scratch on them with a pencil or maybe a coin and the image would get pushed onto your notebook or a piece of paper or whatever? I used to dig these a lot.

I dig finding anything like this. They are so ethereal. Like, they aren't mean to last so it's really neat that they did ya know?

I imagine that these came packed with some sort of Eternian background and that you were supposed to scratch the dudes onto the scene and create a battle of your own.

It's also kind of cool that they were made by Colorform. Colorform was that rubberlike sort of sticker deal that was kind of like this in the sense that you put images onto another image but Colorforms are removable and these one's here are permanent..

I wonder what the one in the middle that was scratched out was? A Masters Logo maybe? I also really like the Pterodactyls.. It's dope that there are dinosaurs in Eternia..

One final thing about things like this.. When I was a young sprat I always thought that it was kinda' wac when they'd make multiple images of the same dude. I mean I get it He-Man is the most popular but in a battle scene how were you supposed to put more than one He-Man on the page?

I know, it was for multiple battles but I'd always go all out on one and I'd wind up with He-Man and Skeletor all over the place and it was mad lame..
80's Mattel MOTU Scans