Hey kids. Another dose of Space Hasbros. That's the one where I take headshots of my WWF Hasbro figs and change the colors so they look like aliens. Listen, it's fun ok? Go and try it.
Things are funnier when they are green. 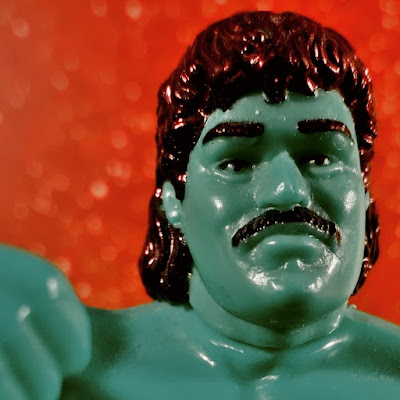 The first guy we have up is Ravishing Rick Rude. I included that super close up face shot because dude looks like Tom Selleck here a but like a Mexican version of Thomas Magnum.
Like imagine a show where Thomas Magnum lives in Mexico City and fights it out with drug dealers in the street and spends time with hot senorita types at the beach where he wears a speedo and has a hairy chest. It sounds like a really fun show. Honestly, I'm sure tons of shows like it already exist on syndicated Mexican weekend TV.
He looks way more like a luchador than he does a WWF Superstar. 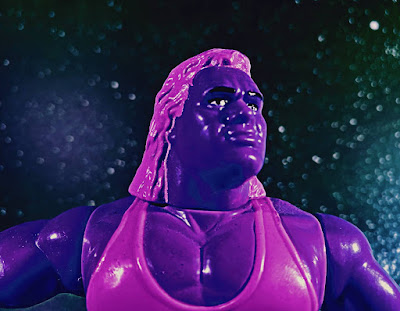 Next up is Mr.Purple, Curt Henning. I mean Mr.Perfect. Anyhow, I really like this pic. I totally dig how his face is shiny and dark purple. I also like the dark background. Usually they come out a much lighter color but this time it was the opposite.
I was never huge into Mr.Perfect in the WWF. I did like him a bit back when he was in the AWA. It aired on ESPN at the time and it felt like they replayed it seemingly daily on the afternoon tips.
He was a really great wrestler though. In the ring he was easily one of the best dudes in the WWF at the time. There were not a ton of great grapplers in WWF at the time so Perfect totally stood out. 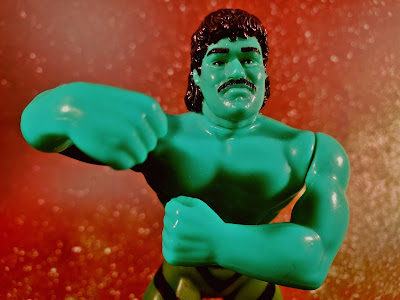 This is the full version of the head shot from up above. I dig how the figure is flexing but also throwing one of those hogs right at your face. If you made that show I was talking about earlier our guy Thomas has to be tossing big haymakers at dudes like multiple times per episode.
That's if for now but keep an eye out for another dose of Space Hasbros before to long.
Hasbro Space Hasbros Toy Pic WWF