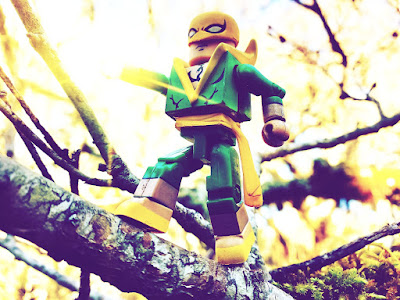 I took these pics out in Annadel State Park here in Santa Rosa. I like to do that sometimes. I'll bring a figure with me and then sort of dip off the trail and find a spot that looks right for a photo shoot. The idea behind this one is pretty simple. Iron Fist is out training his moves in the woods. Pretty basic story line I know but sometimes the classics are the best.
I had a heck of a time getting him to balance on the branch. Sometimes that's the biggest challenge involved with a toy pic. Just getting the figure to balance properly in the space you want him to.
I added the Iron Fist glow later when I was at home. I did it all on my phone. For the most part I take all my toy pics with my phone. I find that the smaller profile of the phone lens is easier to get closer to the toy than a standard camera. That and I don't really like carrying my camera around with me. I'm always afraid that I'll leave it somewhere and walk away... 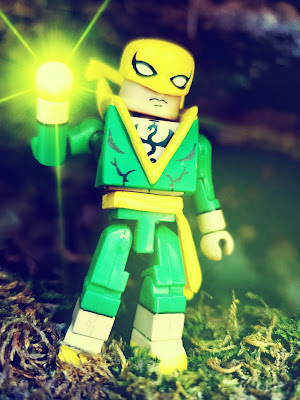 This is the second picture I took that day. I don't really like it as much as the first one but the moss around his feet looks kind of cool.
I really like moss. I dig how it doesn't really have a root structure but absorbs liquid from that air. I wish I could do that. Just suck sustenance from the sky. It'd make life a lot easier. Sometimes deciding what to eat and then actually making the food is such a chore. Eating is so overrated.
RELATED LINKS...
Audio Handbook Of The Marvel Universe: Iron Fist....
Marvel Minimates Toy Pic