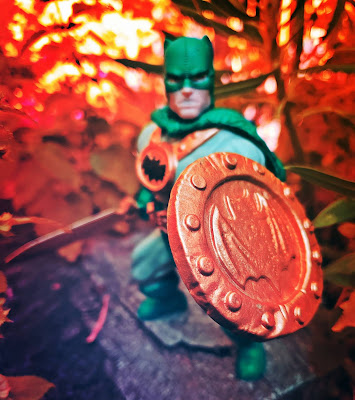 Funko came out with The Primal Age line back in 2016 but I'm just starting to get into them now that I'm on a major MOTU tailspin. I really slept on these guys the 1st time around but I'm making up for it now.
The Primal Age dudes are 5.5 inches and on scale with the old school MOTU line. They have 6 points of articulation.
I don't really know what the story behind all the major DC characters being all He-Manned up but I'm with it in a major way. I think they came out with a comic at the time but I've never read it. I'd rather make up my own story why all this happened.
I don't know what it was that sort of turned me off on these figs in the 1st place. I wasn't really into MOTU was the main reason but now that He-Man is back on the pegs and I've dug into them hard  and I'm looking back at some of the lines I may have skipped on.
Funko made DC in MOTU scale as well as some Street Fighter dudes and some Thundercats as well as a bunch of horror movie guys like Jason and Freddy. 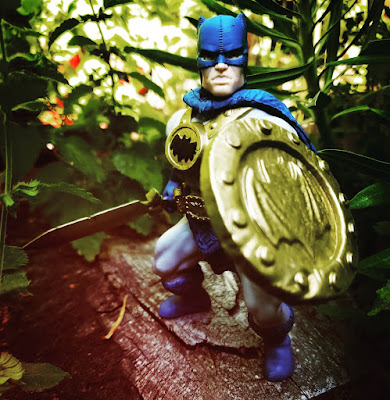 The two pics are essentially the same pic. The only difference is in the 1st one I focused on the shield more than on Batman's face. I also turned it a little red. I like to make things more alien looking by changing the color of the background. If you watch movies about outer space look for the same technique. They do it all time.
I took these pics out in my backyard. The side yard to be exact. If you peek through the leaves you can see the big red sign we found on the side of the road many moons ago...
Batman DC MOTU Toy Pic