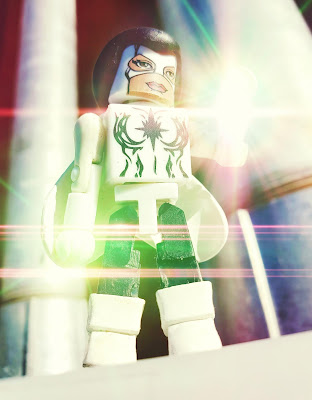 I took this pic over at the middle school. There is an electrical box with all sorts of pipes and stuff coming out of it and I've used it as a staging ground for pics a few different times. It has this cool industrial look. There are a ton of dope little pics spots over at the school. It's a treasure trove of locales.
This is a Minimate of Monica Rambeau AKA Captain Marvel, AKA Photon and a bunch of other names. I always call her Captain Marvel though cuz that's what they called her when I was younger and 1st getting into comics.
She is a massively powerful character that is now just starting to get her due in The MCU having  appeared in Wanda Vision and Captain Marvel before that, the character not the particular actor who played her in Wanda Vision. She was like a kid in Cap Marvel and a full on grown up in Wanda..
I brought the picture home and added a flash effect in hopes of simulating her energy based powers. I did it all on my phone. I take almost 95 percent of my toy pics with my phone. It's easier for me to get the phone into smaller places so it allows me to tuck the figures into odd little crannies.
Minimates Toy Pic Toys