Toy Pic: A Foul Beast Comes Through The Transporter 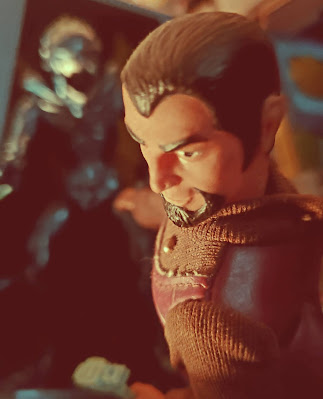 I took this pic in my office. I have a Mego Star Trek Bridge set up on a shelf and I was rearranging the figures there and decided to slip in an Alien figure that I got at Walmart awhile back. He's about Mego height and I thought he'd fit in well.
For the pic I laid the Klingon down and had the Alien come out of the transporter with his arms out. I added an effect that made it sort of look like a Polaroid pic. I think the darker tone and blurry details makes The Alien look a little scarier.
I really like the look of the Klingons sweater. The cloth goods make the pic look a little more real. Hats off to Mego and Lanard for making such a great Alien.
Lanard Mego Star Trek Toy Pic