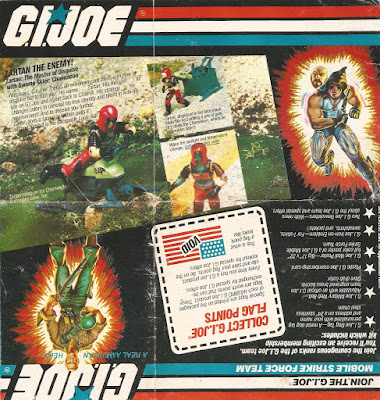 I found this in a stack of magazines I was going through the other day. I was picking through my "archives" to see if there was anything in there that I could part with for the Flea Market. I managed to find a few Starlogs that I had doubles of but not a lot more than that.

I'm a magazine hoarder of the highest order. I don't know why but I just can't seem to toss any of my old magazines even if I almost never look at them. I think it's because I imagine how hard it'd be to find another copy of Lee's Toy Mag or an old issue of Wizard.. I mean, they totally don't even make them anymore right? 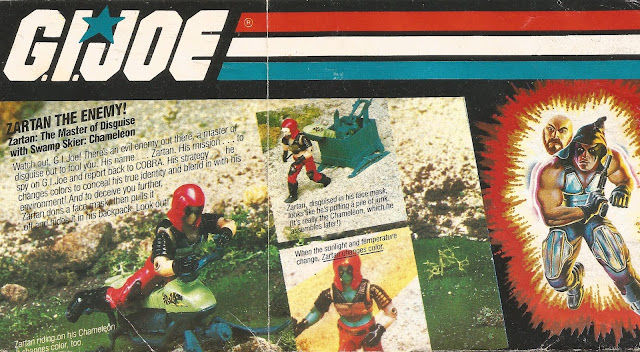 Ok, so this figure is one of my favorite figures of all the times and spaces. I remember doing this mailaway, waiting and then finally getting and loving Zartan with his color changing action along with his disguise and neat little swamp scooter with all my heart, I mean that. I LOVED this figure so much.

Zartan had so many great features. First of all he could change colors if you left him out in the sun. That was so amazing to me. It was like magic. Second of all he came with this really neat disguise, it was a face that he could place inside of his hood so it pretty convincing aside from the fact that he was still wearing Zartan clothes.

Then there was that really awesome swamp vehicle he jammed around in that he could take apart and carry behind him in a cart so he could appear as a swampy hobo..which he sort of was anyway really... 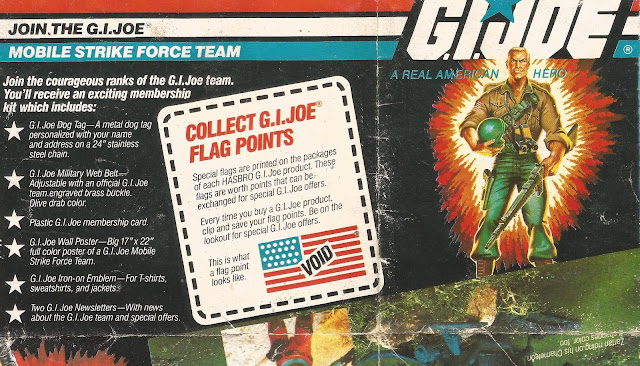 Here is the flipside of the Zartan thing. I reversed it so that you'll be able to check it out without doing a handstand. Can you do a handstand? I totally can't. Even at my most fit I've never been able to do one, or a cartwheel either. It might be fear that's holding me back. I don't know.. anyhow, what you have on this side is all the benefits one would get from joining The GI Joe Mobile Strike Force Team.

There are some neat benefits including swag like a belt. I was never a member of this. I'm not sure if I've ever been a member of any fanclubs.. I did get Sweet Pickles stuff from Avon.. that's kind of sort of the same thing and at one point I got like books about animals in the mail every month.. That's sort of like being in a fanclub I guess...
GI Joe Hasbro Scans