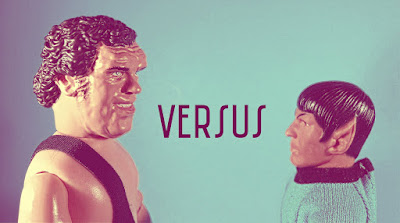 In our final second round bout to crown The Mego Fighting Championship we are about to witness a fight between one of the largest most powerful athletes the world has ever seen and a starship officer.

At first this might seem a mismatch but Spock being Vulcan possesses incredible strength and agility far beyond that of an Earth man, but is it more than an Earth Giant? We shall soon see...

As the fight begins Spock shoots in quickly and tries to latch on The Vulcan Grip. This is the move that he used to win his 1st round bout. It's a staple of Suus Maana, the planet Vulcan's predominate martial Art.

The move when used properly renders it's victim instantly unconscious. The pinch is effective but also safe. After a few moments the recipient awakens a bit groggy but otherwise safe.

Spock applies the grip but it may be that Andre's hide is too thick as the grasp has no effect! The Giant shrugs it off and grabs ahold of Spock and twists him around for a choke.

The Vulcan attempts to resist by trying to use Andre's strength against him using the principles of leverage but is the The Giant immune to science..Despite his best effort and skills in Suus Manna Spock can't budge Andre an inch..

Andre ragdolls Spock to the mat and locks on The Camel Clutch, called The Steiner Recliner in some circles or El Cabello south of the border. The move is a devastating submission hold as it puts pressure on the lower back and throat area at the same time.

We could see a submission here... Is it possible that The Giant is showing mercy to Spock? Is he hoping to avoid breaking Spock by making him surrender? Will Spock accept the mercy or shall he fight on?

Before we can get an answer to our question Andre shows us his incredible power by performing a sort of Karelin Lift on the prone Starfleet Officer.

Spock goes up easily for Andre who turns his body around so that his head is pointed down! He's not going to spike him on his head? No, that would be akin to MURDER! No, he is! The Giant is going to spike Spock! 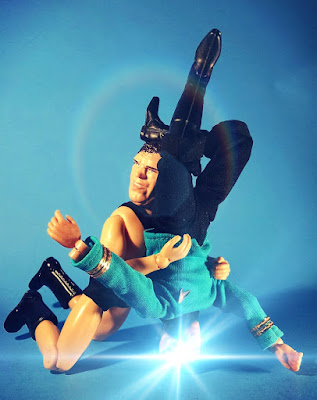 Oh, the humanity.. Spock is dead.. There's no way that he could have survived the Ganso Bomb. Andre is your winner.

Spock's limp body lies on the mat as medical personal give aid.. After 10 minutes unconscious Spock finally moves a finger.. Andre had long since left the arena.

He was at local tavern Cheers drinking buckets full of beer when he learned of Spock's survival.. He was heard to say.."So?" when told Spock was awake...