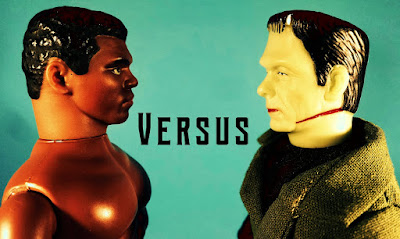 This time around on the Mego Fighting Championship we continue first round tournament action as the self proclaimed Greatest Of All Time Muhammad Ali takes on undead creation Frankenstein.

Each fighter brings different strengths to the ring, Ali has speed, power and big fight experience as the Heavyweight Boxing Championship Of The World while Frankenstein comes with power, durability and maneuvers brought from beyond the grave.  This could be anyone's fight!

As the brawl jumps off Ali peppers Frank with jabs and attempts to move to the side away from the lunging monster's grasp.

Ali's jabs seem to have little effect on the creature from beyond the grave but Ali's speed is far superior to Frank who shambles around the ring like moss on the side of a deep forest tree.

Despite the difference in speed Frank is able to wrap his arm around Ali's head as he attempts a bulldog choke.

Frank's superior strength allows him to fend off Ali's attempt at blocking the choke as he begins to squeeze The Greatest's head between his recently sewn on arms. Arms that at another time belonged to a completely different man having been added via an ungodly experiment!

Before the choke can be fully locked in Ali scoops up Frank high in the air and deposits him on the ground head first!

The monster despite being a creature from beyond the grave still has a brain that feels the concussive effects of skull on concrete!

Ali having experience in pro wrestling follows up the slam with a giant elbow drop similar in style to Dusty Rhodes' Bionic Elbow. The strike lands with pinpoint accuracy on Frank's grill. The ring quakes and a blinding light explodes from the impact point. Frankenstein might be done!

Ali leaves nothing to chance and follows up the elbow with a stomp to the face of Dr.Frankenstein's greatest creation. The beast is finished, his head crushed. Luckily a replacement is on the way recently having been produced from a team of grave robbers working the area. It's smart to think ahead.. (zing!)

That concludes this first round fight. Last week we saw Bruce Lee defeat Action Jackson so our first second round fight features the winners of the concluded battles, Muhammad Ali vs The Dragon Bruce Lee. That is sure to be a barn burner.