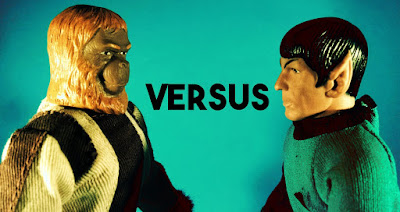 This week on The Mego Fighting Championship we conclude first round action with a battle between two men of science, Planet Of The Apes' Dr.Zaius and Star Trek's arguably most popular character, Mr. Spock.

Before the fight begins both men met in Spock's locker room and agree to a pre-match stipulation. The combatants being up on the latest concussive science studies decide to forgo closed fist strikes to the head and contest the battle under old school Pancrase Rules which disallow punches to the skull but do allow them to the breadbasket.

The men lock horns in the center of the ring and jockey for hand position in a judo-like style, Spock reaches for the orangutan's wrist while Zaius moves his right hand under Spock's left arm. He may be trying for a hip toss of some sort.

Zaius, an evolved Orangutan has incredible strength and agility but Spock hailing from the planet Vulcan has strength far beyond normal human limits as well. I'm not sure which of the two has the edge in strength.

After grappling around for a moment Zaius worms his arm around Spock's waist and throws the Star Trek Legend to the mat with a perfectly performed O Goshi or Judo Hip Throw. Spock hits the ground hard and appears to have his breath knocked from his body.

He visibly gasps for air and rolls about on the ground like a worm in a small puddle of water.

The simian seeing Spock's weakness moves in for a submission of some sort but Spock may have been playing possum and slides his legs over The Doctor's shoulder maneuvering for the Ude Hishigi Juju Gatame otherwise known as the Japanese Armbar.

Zaius may be too strong as he easily pulls his arm free of Spock's grip and a scramble ensues as both men work for superior position.

Spock gets behind Zaius for only a moment but the moment is enough as he clamps on a quick Vulcan Nerve Grip and Zaius immediately slumps to the ground limp, unconscious. Spock is your winner.

As soon as the bell is rung Spock runs and gets his tricorder and uses it to run some scans on his foe making sure that while unconscious that the Orangutan Doctor is free from serious injury.

The tricorder reveals Zaius to be fine and he quickly comes back to our plane. At first he is a bit discombobulated but quickly sees the situation for what it is and being a good sportsman raises Spock's hand in victory. 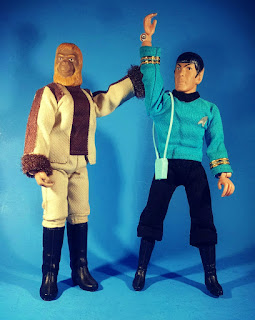 Such sportsmanship is rare in the world of no-rules action figure fighting. This is a proud moment in MFC history, as brief as it is.

This concludes the first round of the tournament so as we stand right now the winner of this fight, Spock takes on Andre The Giant in a what can only be considered an easy fight for the savage Giant and the winners of the 1st two tournament fights, Bruce Lee and Muhammad Ali go at it in a what is sure to be a war between world class strikers! See you next week!
Mego Mego Fighting Championship Toys