Mego Fighting Championship: Andre The Giant Vs. The Fonz 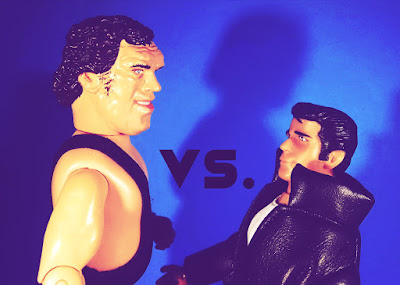 This week on The Mego Fighting Championship we have a matchup of two men on different sides of the size spectrum, Happy Days Star Arthur Fonzarelli AKA The Fonz, a normal sized street tough and Pro Wrestling Legend Andre The Giant, a monster among men.

The Fonz has a rep throughout the Tri-State Area as an ally fighter but remains untested against top flight competition while Andre has toured the planet for decades taking on the grappling world's top stars. On paper this may be a mismatch but only time will tell.

Right at the bell Andre reaches out and grabs Fonzarelli by his famous leather coat's collar. It may have been a mistake to wear a jacket to the fight but The Fonz isn't really the Fonz without the jacket.

Some have implied over the years that The Happy Days star's powers may be connected to the wearing of the jacket. It's his power totem. Will it be enough to fend off a rampaging giant. A man who stands over ten feet tall? Probably not but the fights only just begun.


Andre uses the collar as handle and pulls The Fonz into a tight bearhug. Folks in the front row claim to hear bone break but at this point that's only hearsay.  Regardless of that the hold is tight and Fonzie is visibly showing pain on his face.

Using the bearhug as an opening Andre rips The Fonz's jacket from his shoulders and hoists him up for a big POWER BOMB! I feel really bad for the Wakashau native.

I'm not sure any man can survive a Power Bomb from the twelve foot giant.  The Fonz's bones turn to dust upon impact. The sound created when plastic meets earth is described by onlookers as "otherworldly".

Upon impact with the ground Fonzie's pal Richie Cunningham jumps in to give medical aid to his fallen friend. Andre, not finished yet grabs Cunningham and strangles him unconscious. Andre is a beast unleashed.

The crowd in attendance would be advised to exit the area! After strangeling Cunningham near death he throws his limp frame on top of his pal and stands triumphant.


With his quick win Andre moves onto the 2nd round of the tourney where he will face the winner of next week's fight... Star Trek's Mr.Spock Vs. Planet Of The Apes' Dr.Zaius. It's a battle between two learned men, a Vulcan Vs. An Orangutan.

The question is will either fighter want to advance and fight The Giant? I for sure wouldn't.. See you next week...
Mego Mego Fighting Championship Toys