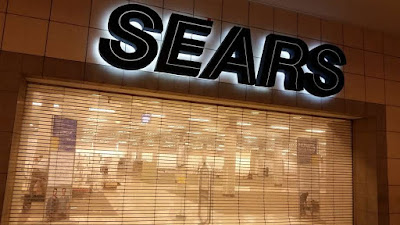 I went to the mall last week to grab a rice bowl at the food court and I discovered coincidentally that it was also the last day for Sears in The Santa Rosa Plaza. I of course knew that Sears was closing down and that the entire chain was on the outs but after losing TRU I had decided that I didn't really want to go over there and see it one last time. Too much has been taken from me. I couldn't handle anymore.

Anyhow since I happened to be there anyway I decided that my heart could prolly stand one last stroll through Sears before saying goodbye. I didn't take any pictures except for the one up there. It was too hard to see another store I enjoyed completely gutted and bombed out. The store was at the point where only the fixtures remained..

I've never been a huge Sears shopper. I do/did buy clothes from there from time to time but for the most part Sears was really only my main entry point into the mall. I liked to park by the front door of Sears and then dip in. I actually wonder what will become my new entrance way into the mall. I hadn't thought about that up until right now..

When I was younger my family used to go to Sears all the time. My dad liked the popcorn at the snack bar they used to have in the center of the store. Popcorn is his fave munch and he'd grab himself a big box of the corn and work through it over the course of the weekend. If you asked me that would be my lasting memory of Sears. Either that or being in the changing rooms over near where the lady's watches are now/was.

I used to sometimes get school clothes there when I was in elementary school and my mom would make me try on every single garment so a trip there would seemingly take forever. If I close my eyes real tight and concentrate I can just about picture the inside of the changing room..

Another more recent memory of Sears is the time that me and the old wife walked all over the store trying to find a Magikarp when we first started playing Pokemon Go.. That was when the game was new and exciting so we had a blast just walking all over the tools and shoes before realizing that the Magikarp could actually be upstairs directly above us..

Sears, I am really going to miss you. I tried to sort of stay away as a method to protect my heart from more loss but that's no way to go through life. I'm glad that I got to walk around you one last time before letting go.
Santa Rosa T.R.O.Y