I dig old TV Guides. I don't collect them or anything but if I come across one I like to give it a flip through. It's fun to see what was on the tube at a particular time. It's a nice time capsule of what you were actually doing and watching on an the exact hour of an exact day. It's also interesting to try and compare what you remember to the actual-factual sacred texts of TV Guide.

Of particular interest is the Saturday Morning Programs, the CARTOONS man! I don't have to tell you the importance of Saturday Morning cartoons so instead of doing that I'm just going to jump directly into these pages that I scanned in from the February 3 1990 TV Guide Saturday Morning Cartoon Listings. I put a small red dot next to what I think I would have watched given these choices. 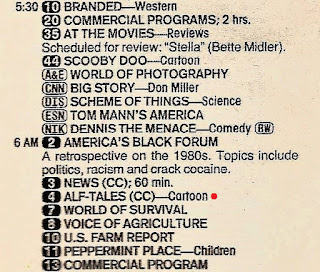 That up there is the real early morning stuff. I really doubt that I would have even been up at that hour. In my gut I seem to recall usually getting up in the 7:30-8 AM range most of the time, maybe a bit earlier or later but around there.   If I would have gotten up though I guess I would have watched Alf. It's either that or Peppermint Place but that's more of a baby show.

If I was up at this hour which again is a maybe I would have for sure watched Bullwinkle. I was a big Bullwinkle guy. I still am. I think that the show holds up really well in a kitschy way.

Mousercise is also a little intriguing in a weird sort of way. I actually could see me watching this for at least a few minutes. I'd go on these weird fitness kicks every once and awhile as a kid. I could totally see me doing a bit of this if I was on one of those jags.

At 7, and for some reason I forgot to make a dot I'd probably watch Alf again. Either that or Buster and Me. Buster And Me was a local kids puppet type educational type show. It was cool, I never really connected to it but I have fond memories of seeing it  The Buster And Me crew do local cons from time to time. They attract a fair sized crowd of well wishers and seem to be pretty happy.

At 7:30 I'd be all into Muppet Babies. I was a Muppet Babies mark. This show really talked to me for some reason. I guess it's because I was such a Muppet Fan and it was nice to see the characters again and the whole baby version of dudes wasn't played out yet. Nowadays a baby version of something is the worst but back then it was sort of fresh.

Into the 8 AM hour I think I'd go for Captain N: The Game Master. It wasn't the best cartoon or anything but Nintendo was awesome and I was into checking out anything NES Related. 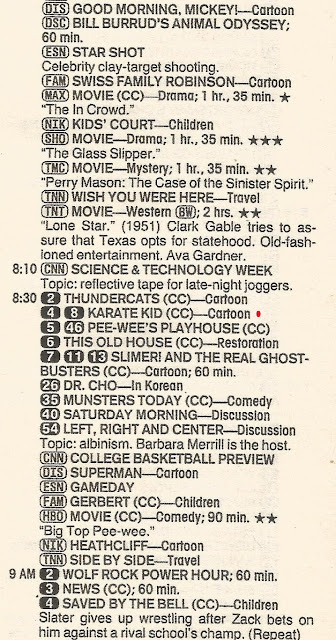 I don't really remember much about The Karate Kid cartoon but I'm a huge fan of the movie and the toy line by Remco so my gut says that's what I'd probably be watching. Either that or Thundercats on channel 2. You are prolly asking why not Pee Wee's Playhouse. The answer? I just wasn't really all that into it at the time.

I can really appreciate it now but at the time it was just too weird for me. I think that was by design in a way. I don't know how much this was a kid's show as much as it was aimed at teens and weird adults. There is NOTHING wrong with that. The show is great. All I'm saying is that when it 1st aired it weirded me out but now that I am a weird adult I appreciate it. 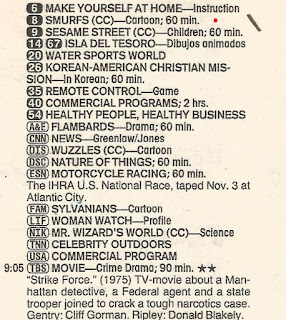 During this block I'd for sure be watching The Smurfs. I was a pretty big Smurf mark at the time. I remember the reason that I finally figured out how to program our family VCR was because I needed to tape The Smurfs on some Saturday morning when my family was going off to do something else, probably a baseball game or Spring Lake or something.

We went to Spring Lake a lot with my uncle and his family back in the day. Spring Lake is our local swimming hole. I haven't been there in years.

I might also watch Remote Control but I don't think that we got channel 35. If you wanted to sum up what the late 80's/early 90's were like go watch an episode of Remote Control. The aesthetic was spot on for the era. That's were I discovered Colin Quinn. He's one of my favorite comics.

Remote Control is also where I discovered Kari Wuhrer. She was one of my bigger crushes of that era. These must have been Remote Control reruns in syndication. I don't remember them airing any of those but they must have. 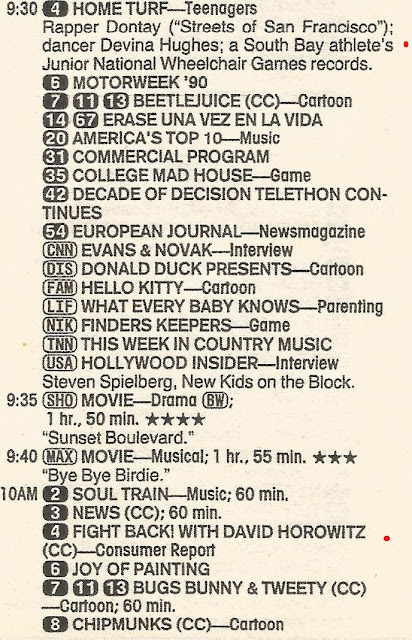 At 9:30 we have Home Turf on KRON TV.  KRON was an NBC Affiliate at the time. At one point we had two different NBCs. One was on 4 and one was on 11. Now NBC is channel 11 and KRON 4 is an independent channel. They have good local news and air reruns of The X-Files and Agents Of Shield during prime time.

At the time though they had a lot of interesting local programs and one of them was this deal called Home Turf. Home Turf was really dope, it covered different aspects of the local hip-hop scene like breaking and rapping and graffiti art. It was really fun well, it was sometimes a bit corny but it was really great for the time. I would love to find some episodes of Home Turf on one of these old VHS Tapes I'm always watching.

For the 10 O'clock hour I would prolly watch Fight Back W/David Horowitz.. I really liked this show. On Fight Back this dude David Horowitz would go around and get justice for consumers that had been wronged. This wasn't something that I'd admit to watching really but I totally dug it. Horowitz was like a real life super boring Super Hero out there fighting the good fight for innocent fools. He ruled.

And here we are 11 AM that was really the end of the Saturday morning programming for the most part. There were a few straggler shows past here but for the most part when WWF came on that was a wrap for cartoons.

WWF Superstars on KTVU was my earliest regular exposure to WWF and to Hulk Hogan and how he ran wild over everyone. Well, to be honest I only ever remember The Hulkster wrestling on Superstars one time. Literally one time. He fought famed jobber Tiger Chung Lee. I remember they hyped it up for a week and I was so pumped to finish a Saturday Morning with an appearance by The Hulkster.

Hulk was the man and he only fought at arena shows or on PPV. If you wanted to see Hulk Hogan you generally had to pay for it. This was a rarity. I don't remember what the match was like but I do remember thinking that I didn't really like The Hulk.  I carried those feeling with me throughout my youth.

Alright kids and gals that's that. I hope you dug this little look back at Saturday Morning Cartoons. They used to be a real big part of our lives. I lived for those few hours where I was the only one awake and the TV was all mine for once.

When I was real young we only had the one main living room TV it wasn't until I was really aged out of Saturday Morning toons, which I will admit came later in life to me than to other dudes that I got a TV of my own and I mostly used it to watch stuff like Hogan's Heroes on KFTY TV 50...
Magazine Scans Saturday Morning TV