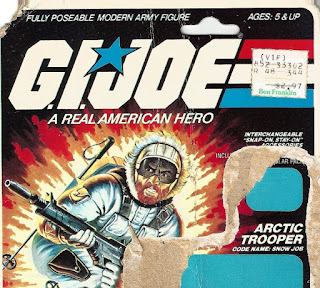 I've recently started in on this big reorganizing project in my garage. For the most part i'm trying to get my comic books in order but to get all the comics in the same place I've had to dig through some bins or magazines and assorted papers. It's pretty fun really. I'm finding things I haven't seen in years. One of those long unseen finds was a couple GI Joe File-cards from Ben Franklin's which was my neighborhood GI Joe Spot!

Ben Franklin's was over by where Oliver's Market is now, it was A and B Market at the time though. The Ben Frank's has long since gone out of business. The building has a gym in it now. Anyway, Ben Frank's was like a five and dime type store. They had candy and aspirins and magazines as well as a pretty banging toy section. Ben Frank's was where I first saw GI Joe ARAHs as well as Transformers and most other popular toy-lines of the early 80's,

The thing that really jumps out to me is the 2.97 price tag, That price is burned into my brain. For awhile my life was spent trying to gather up two dollars and ninety seven cents so that I could go down to Ben Franklin's and cop a GI Joe Figure.

B.F's was within bike distance of our house and right on the route that I used to get home from Binkley Elementary so I'd roll through there and check things out on the regular. I seriously might go there 4 out of 5 days a week, I'd usually pick up a box of Nerds or some Jolly Ranchers or whatever and check out to see if there were any new GI Joes.

I have a lot of the dudes from this series. There are a lot of classic figures here.. Let's see.. Blow Torch is Dope, Doc will always be my preferred GI Joe Medic, Spirit is great, Gung Ho is dope, Snow Job and Storm Shadow of course, This is seriously one of the illest collection of figures of all the time... I mean come on, You got Duke, Roadblock, Destro, The Baroness.. these are the classic GI Joe Characters!

Back to the point, I really miss that Ben Franklin's. At one point it kind of flipped he script and became a craft type store and they stopped carrying toys and candy so I actually quit going there a long time before they actually closed down, Still though, I have really great memories of shopping there and of getting many of the Joes that made up the back-bone of my GI Joe Collection..
GI Joe Santa Rosa