on May 29, 2018
I found this beauty at The Flea Market this past weekend.. it's so great. There is a dude there who specializes in Star Trek stuff, like figures mostly but also other stuff. He is a real authority on the subject. He self published a booklet about Star Wars Action Figures. It's xeroxed and comes in a Star Trek: next Generation Folder. It's pretty great. I bought it for I think 5 or 6 dollars. Anyway, I bought this from him this past Sunday. It cost 2 dollars..

It's intended for the old style computer discs. Not the big floppy ones, the other ones. It can fit CDs though if you turn them sideways. I don't really have a lot of either but from the moment I saw this jammy I knew it was meant for action figures! It's not quite on scale for the Playmates Star Trek dudes but it IS a shuttle craft and I do not have an action figure sized one of those.

It would prolly fit my Star Trek Minimates perfectly TBH but I have way more of the Playmates dudes and I'm running out of places to stuff them..


That's what it looks like. It's really great huh? I like how it's blue. They didn't have that color shuttle craft on the show if I remember correctly. They should have but they didn't. I wonder if like out in Star Fleet if they had different color shuttles? Prolly not. I think most of the Star Fleet ships are the same color. Grey. 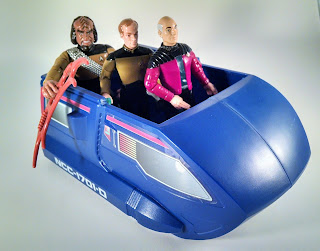 Check out our dudes here on an away mission. It must be a nice planet. They put the top down. I like how Worf has his Bat'leth hanging out the side of the whip. Also, I wonder what they need Lt. Barkley for? You can't see it but he has some weird blue accessory in his hands.

How come Playmates always made the accessories in the weirdest colors? I should ask that dude at The Flea Market. I know for sure that he would know the answer. 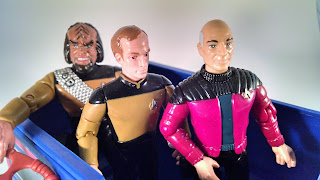 Before I head out of here I thought I'd share this nice little pic of the dudes looking out the top of the shuttle on their way to some super fun space adventure. Picard looks happy. Barkley looks scared and Worf has a snarl that belies how much fun he's having right now..
Flea Market Star Trek