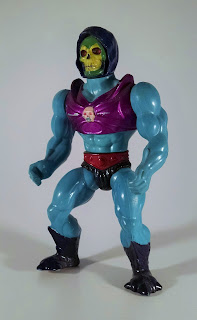 I found this dude over at The Dig the other day. I've had a few pretty big MOTU scores over there in the past. The figures sold so well back in the day that they pop up fairly often at Flea Markets and The Dig and such. Everyone that I knew back then had at least He-Man and more than likely at least a few others.

This is my 2nd Skeletor. My other one is the Battle Armor one. For whatever reason I don't have the standard Skeletor. I could just grab one on Ebay or whatever but I feel like they were so common that I'm gonna run into one eventually. I have his Black Panther that he rides on with the saddle but not him to ride it. Sure, Battle Armor Skeletor can ride him but it's not the same...

Skeletor was missing all of his accesories as these dudes ALWAYS are. I will from time to time find a loose weapon but it's super rare to find them all together. If you go online the accessories cost as much and sometimes more than the figures themselves.

This version of Skeletor didn't come with his famous sword, the purple one that you could combine with He-Man's sword to make The Sword Of Power. He comes with claws.

I guess that's cool too. Maybe these are his backup weapons for when he loses control of his half of The Sword Of Grayskull. It does make for a neat action figure but I don't know how neat of an actual weapon it is. I mean, you could mess someone up with these but you do have some range issues if faced with a sword or a spear or something. 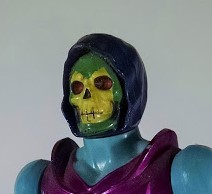 The head sculpt for Skeletor is just fantastic. That's one thing that MOTU had in spades, really good looking heads. It almost makes for using the same body for so many dudes. I get it though, saves money.

Anyway, that's that. I never know how to finish these things. It's all really fly by the seat of my pants stuff.. Final note. I looked up on the shelf that I have my MOTU dudes on and I noticed that what I thought was Battle Damaged Skeletor was actually another one of these. That's super weird. I need to pay closer attention to things.
Mattel MOTU The Dig