2 More Dope Robot Drawings. One With A Square Head And One With A Triangle Head. 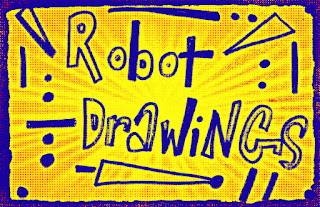 I've been drawing robots again lately. I don't know, it's sort of soothing. If you focus on the work it helps to disintegrate any stress that you might have at the time.

It's a nice to focus on something "creative" as a stress blocker and in the end you get a cool drawing of a robot. My prefered media is crayons, crayons and black sharpies. I draw the outline of the robot in sharpie and then I color him in with crayola. It's not rocket science.

Anyhow, I have two robots to present to you this time around and both of these dudes are gonna be available to the first two folks who want to get up on them. I'll tell you how at the end.. Let's take a look at the 1st robot though.. 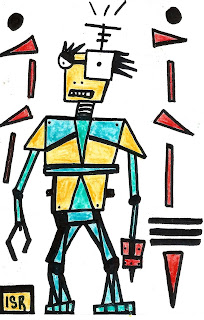 I like this guy. He looks surprised in one eye (the square one) and tired with the other eye. That's hard to do. It might be easier for a robot but for a flesh-bag like me it's almost impossible. Believe me, I've tried.

On a side note have you ever noticed that really cool people always sort of have a kind of tired look in their eye? Like they are super disinterested in what's going on? That's what makes you cool, disinterest.

Anyhow, I like this guy a lot. He's cool cuz he has a pincher on the end of one arm and some sort of drill on the other. He's multi purpose.

He's also like seriously the first time that I tried to draw legs on a robot. Usually they just sort of have a tube that makes them float. Don't ask me how it works. I'm a robot artist, not a robot scientist.. NOTE!! The Square Headed Robot has been claimed... 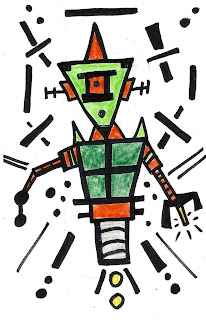 Here is the 2nd guy. He's cool too. That one big eye of him makes him look both crazy and serious at the same time. He also has one of those floating tubes that I was talking about a second ago (writing about?). I can't explain how it works but somehow the little yellow dots keep him up in the air. It's a miracle of "science".

He has a pincher hand too and the other one is some sort of twin circle deal. I have no idea what that is supposed to be about. I kind of think I might have forgotten to draw something on the end of his circle-nub. That's on me. Sorry dude.

He's a lot pokier than the 1st robot too. He's sort of punk rock. Not really. He is spikey though. I'm not super keen on his color scheme which again is on me. I colored him and all. Again, sorry dude. It's not your fault that you aren't my favorite robot drawing. It's all on me.

I do like the antenna that are coming out of your ears though homie. I wonder what it is that you are listening to. Maybe you are transmitting something? Maybe both. Maybe one ear-tenna is doing one thing and the other is doing the other. Who can say?

So, there you have it. Two all new/all fun robot drawings. Both are up for grabs. If you do happen to be interested in having me mail these to you hit me up over on Facebook or on Twitter and I'll pop em' in an envelope and shoot em out your way. I'll prolly toss in a sticker too so that it's not a total waste of time for you..
Robot Drawings Robots