My Pics From Sac-Con. A Taxing Road Trip Adventure. 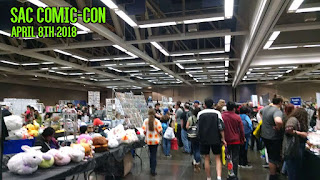 Hey kids. This past week we went to one of our fave Comic-Cons... Sac-Con in our state's capital Sacramento. I go into full detail on all the fun-tivities, that's a fun activity, on Episode 151 of The Tru RPT but I had a few pics that I wanted to share. Nothing overly special really but they do help add some texture to the show. Listen to these while you listen maybe. IDK... 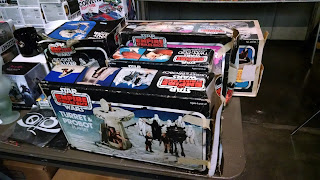 Here are some dope Star Wars toys. I took a good long look at the Cloud City ship from Return. I passed on this at our local toy con and regretted it. I didn't get this one either. I don't know why. I didn't even ask on the price. It was a taxing day.. 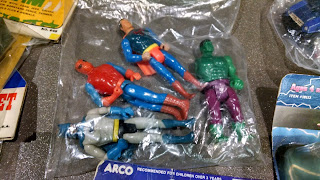 I was gonna ask on these Mego Pocket Heroes but then noticed Hulk was missing his arm. I still should have asked. I could have used that as point to talking him down. 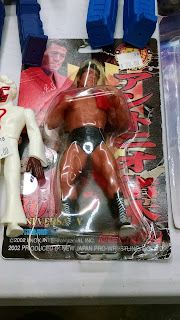 This one dude had a ton of great Japanese toys. It was Robots and Godzillas mostly but there was this really neat Antonio Inoki figure for only 20 bucks. Japanese Wrestling Toys get pretty pricey sometimes here in the states. This was a way fair price. 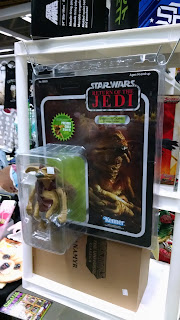 This Salacious Crumb was way big, like the card might have been 16 inches or so. Of all the figures to give the giant treatment to I think that Salacious Crumb is a great choice. He's so smarmy and gross.

I don't play a lot of video games but Fallout is a series that I really appreciate. I like the aesthetic as well as the game play. It's just such a time suck that I can't get involved. I'd never do anything else. These Nuka Colas are really neat though. I like how they have dust on them like they've been tucked away in the back of an abandoned Texaco, and I really dig the wooden crate they come in. 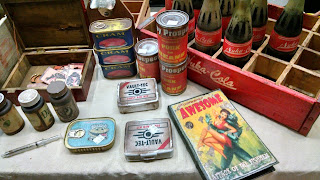 There were some more neat-o Fallout inspired items.  All of this is neat but I like those little Vault-Tec kits the best. I would totally use one as my wallet if I would have copped it. Again! I didn't get any of this stuff either. I was in a funky mood. Listen to Ep.151. It explains more.. 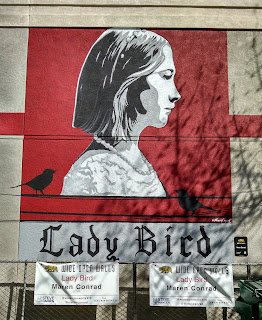 On the way back to the car I spotted the Greatest Mural In the World! Lady Bird is of course the awesome movie that came out last year starring Saoirse Ronan as the title character.  She has a bunch of wacky adventures all around Sacramento. Nice to see that Sac is proud of the flick and want to fully represent. Dope.

The movie is so great. If you haven't seen it yet do yourself a favor and do so. Saoirse is terrific overall and extra-terrific here,  I mean look, she's on a mural. It must be great.

So there you have it, my Sac-Con Pics. Check em' out while you listen to Ep.150. It adds an extra dimension to the proceedings. Move's em' up into awe-inspiring 2D!
Toys