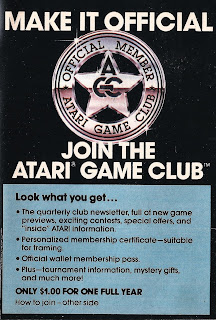 I was out on the garage sale circuit the other week. I wasn't overly successful. Not at all successful really but it's always a little fun to go out. The weather was nice at least. Sunny but still a bit chilly, perfect for a light coat or a sweater. I wore a long sleeve flannel if you were wondering.

I hit up a couple garage sales and one estate sale. That's where I found this Game Club advert. It was in the back of an Atari 2600 catalog. The estate didn't have any other Atari stuff or game stuff at all really outside of this catalog and a Dig-Dug game with the box. I grabbed that too.

I don't think that I've ever signed up for a fanclub or anything like that. I might have been in The Nintendo Power Club, ormaybe my brother was. I do remember the stuff from the fanclub packet being around the house at one point and I know that we got Nintendo Power for awhile.

The Atari club was only a dollar a year. That's pretty good. 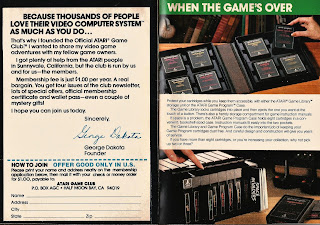 I'd like to read an issue of the quarterly newsletter that they put out. I wonder if those are available online somewhere? They must be right? I wonder if they were full of insights or if it was wack? It could go either way. Sometimes these fan letter deals are awesome like Nintendo Power but sometimes they don't really put in any effort..

On the other side of the deal is an advert for two different ways to store your Atari Games. I guess of the two I like the bottom one. I dig how you push the buttons and your game pops out. It' s overly complicated and pretty cool.

The best way to store your games is prolly how Ferg from The Atari 2600 Game By Game Podcast does. I saw a pic of his setup on Facebook and he has em' all on shelves sort of like library book style. They look nice like that. The titles are really bold on the side.

I only have a few boxed games. I think three maybe, one is the Dig-Dug I just got, one is Decathlon by Activision. I can't remember the other. At this point storage isn't really a concern. They're on the corner of a shelf down on the Earth Base.. Next to some Karate Books I have..
Atari Magazine Scans