I was digging through an old box of magazines and such that I picked up at the flea market awhile back when I came across these neat mail away adverts for Star Wars Stuffs. I am a huge mark for old magazines. I like to poke through them for weird ads and pictures of things like VCRs and Laserdisc Players.

Usually the kind of things that you find are things that you aren't super interested in. It's much like magazines of today. There are tons of ads for household items and toasters or whatever but very little as far as action figures or Star Wars books. Of course I found these in an issue of Famous Monsters Of Filmland from 1979 so the opposite was true. There was Star Wars/Trek galore but very little as far as toasters went.

Let's take a look at what sort of things they were selling in good old Famous Monsters. That first page up there is pretty neat and please try and forgive the wrinkliness of the scans. It looks like the magazine may have gotten wet at some point.

Ok, up on the top row there are some neat Star Wars books. The first two look to be paperback photo books but the third one is a pop-up book which is absolutely delightful. I really loved pop-up books when I was a kid. I'd try and use them as action figure playsets. It didn't always work very well, honestly it didn't really work at all but I had fun trying. It was hard to keep the books open enough that you could play with the figures in them. The books kind of want to snap shut because of all the paper machinations contained within.

Right below the books is the gold of this page, the giant Star Wars figures! I was into these as a kid. I seem to remember having only one or two but I coveted them all like crazy! This was back when I lived in Illinois and this neighbor kid named Steve had a bunch of these 12 inch badboys, he was that kid that had ALL the great toys.. I was so jealous.

Looking at this page my favorites are the Han Solo with the medal that Princess Leia gave him and Chewbacca. I really like Chewie. He might be my favorite character of the original trilogy guys. I've always been a mark for the sidekick, for the second Banana.. I don't know why really. I've just always been that way.. maybe it's an insight into how I view myself, as a second banana.. who knows..? 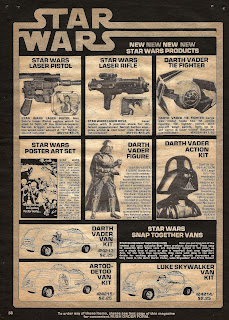 Ok, let's dig into the 2nd page.. Along the top row you have a couple blasters which is great. I've always been a fan of the Han Solo Edition Blaster. I think it might be my favorite of all space guns but I am also partial to Wilma Deering's gat from Buck Rogers.

Right next to it is Darth Vader's Tie Fighter. I had this one as a kid. I asked for the normal one, got this and threw a fit like a little dingleberry but eventually learned to love it. I was a real jerk as a kid.

Right below that there is a poster book that you can color and two models of Darth Vader. They seem to be snap together ones. That's cool I guess. I dig models and can appreciate the art but have very poor manual dexterity so I've never had any success with them and doing the snap together kind was fun but also felt like a cop out..

These Van kits are beyond dope! But are also Snap Togethers so are also a smidgen wack.. I don't know, I think that the idea of putting together a custom van with Darth Vader on the side trumps the fact that it's a snap together dork model but I guess it depends on how you look at it.

If you click on the pic and read the fine print you will happily learn that the decals for these bad boys were GLOW IN THE DARK!!!! Amazing. Nothing, NOTHING, beats something that glows in the dark! I mean that, Glow in the dark things are the BOMB!!! I don't use the phrase The Bomb all that often or all that lightly so dude, when I say that these are that you can take it to the bank.

I think if I were to place them in order of coolness it would go like this.. Darth (Obviously) Artoo-Detoo (When did they start spelling it R2-D2?) and then Luke Sky. Luke's cool and has become cooler as he aged but this is Star Wars Ep.1 stuff and at that time our boy luke was simping about Power Converters and stuff..

If you want to get a look at what these looked like when completed you can check them out here.. They are GLORIOUS!

So, there you have it.. Two terrific pages of Star Wars Merch from an Old Magazine.. I hope you consider reading this and looking at that to be some time well spent. I really do wish that. I always hope for the best for everybody.. I'm super nice like that.. (ha!)
70's Magazine Scans Star Wars