I found these in a box of stuff from The Cowboy over at the local flea market. He's the dude that brings out literal tons of garbage every week. I'm sure I've talked about him multiple times on the sho

I'm pretty sure that these are the 90's release of Monster Candy. I'm not a monster expert or a candy expert for that matter but I think that the originals of these were Candy Cigarettes. These are still fun though.

There are actually 5 of these in the set. I'm missing The Phantom Of The Opera. That's cool though. He's the lamest one if you ask me. The Creature is the best in case you were wondering.

This is what they look like from the flip side. I think that is Frankie on the top. Frankie caught in some spiderwebs. What a horrific image. Imagine that big lunkhead trapped in a web and swinging his arms around all goofy like while moaning in that sad way he does. 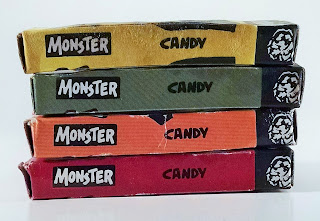 On the side there is a really neat image of The Creature From The Black Lagoon. He's my favorite of all the Universal Monsters.

The dude who was in the costume for the 1st movie was the guest of honor at at film-fest here in town the other month. I didn't go. The tickets were a bit on the pricey side and as cool as it might be to meet the dude inside the suit I have no idea what he looks like in there so they really could have stuck any old dude behind a table and told me it was him. 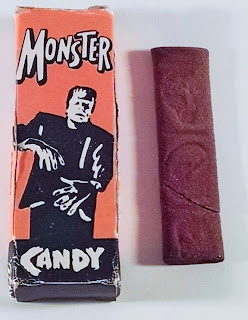 The Frankie still had the candy inside. It looks like a weird candy plank. It's roughly the size of the red plastic piece that comes inside the cheese and crackers packet, the one with the really good crackers and really orange cheese.

I'm a little tempted to eat the candy. It's prolly still good, at least sort of good right? When I say good I mean good as far as not rancid not good as far as tasting good. It doesn't look like it tasted good when it was first issued. The appeal of these candies is for sure in the box not the contents.

I don't remember ever getting these when I was out on the Trick Or Treat Circuit. I wonder if I would even remember if I did. I wasn't the biggest monster fan as a kid, I liked zombies and stuff but I was mostly into soldiers and wrestlers.. IDK. as I've aged I've come to appreciate them more.
Flea Market Halloween