Toys R Us Ad From 1983: Computers and Atari Games Galore! 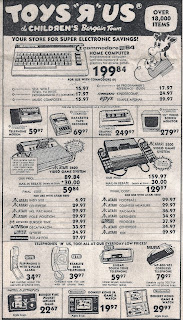 This newspaper I found just keeps on giving! This was sort of near the comics but not really as close as I would have expected. Maybe they didn't want the kids to see it as much as they wanted the parents to. IDK. it's a mystery.

Let's take a look at what it has to offer.. There is a Commodore 64 right there at the top. I never had a C-64. My family invested in a Tandy. I enjoyed it and have no regrets. It was fine. 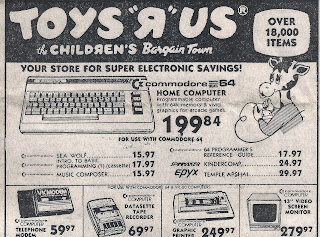 You can grab the modem for 60 bucks and the cassette player for 70 bucks. That seems pricey to me. I had a tape player deal for the Tandy and it was basically just a normal tape player. Maybe that's just what they cost at the time.. IDK..

The printer is 250 bucks and the monitor is another $270.. Overall this is a pretty pricey set up huh?

In comparison the Atari 2600 below it goes for 60 bucks with a a rebate. Did you ever buy anything with a rebate? I can't say that I have myself. It always felt like a scam to me but I'm sure it's not but I'm also sure it took super long to get your money back.. The 5200 is a bit more at 129 with a 30 dollar rebate.. 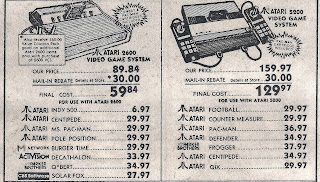 The games for the 2 Atari systems are about the same at 30 dollars or so. Q-Bert for the 2600 and Centipede for the 5200 are a bit more. I wonder why? Where they newer? Maybe. Well, it looks like some of the other arcade ports are a bit higher too. What do I know?

Right below that they have some phones. Just standard type phones. That's cool I guess but right below that are some Game And Watches! and A Mattel Burger-Time game. I will state for the record that Burger-Time is my favorite Arcade Game to play nowadays. It's pretty challenging. Those eggs are tough to avoid!
Magazine Scans Toys R Us