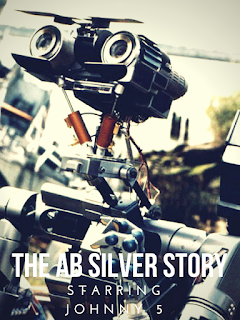 I just received this via Email from A.B Silver's Publicist. At least that's who he said he was. Really though, I don't have any reason to doubt him. It's prolly just one of the pirates though. They forced dude into unqualified double duty. He prolly made the poster too now that I think about it.

So, there it is.. The 1st poster for that good old A.B Silver Story that we've been hearing so much about. I guess they are gonna go with that title huh? I would have called it something else myself, Silver Linings? Silver Tongue or how about this.. Speech is Silver but Silence Is Golden... Ha! I like the poster though.
AB Silver J5 Movies