I found this sticker on a tape at The Dig the other day. I sometimes feel like I've seen all the different store labels around these parts but then I come up with one I've never come across like Rio Video. I'm totally unfamiliar with those dudes. I like the label though. The little drama faces are cool. Let's you know that you might find some funny tapes or some sad tapes. That's quite a selection.

The 347 phone prefix can be a few different places, New York or more likely Rio Nido California which is about 45 minutes from Santa Rosa. That's where I live. That seems more likely. 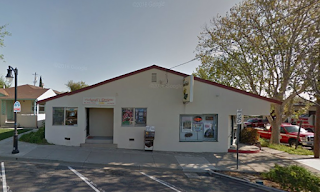 That's what it looked like. Pretty nondescript but that sign is intriguing so I went ahead and turned the pic around on google so that I could get a better look at it. Here's what I discovered. It's pretty dope. 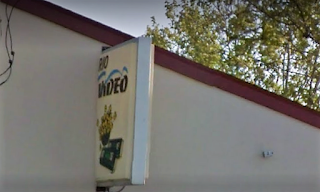 Dig it, first of all it is in fact Rio Video so I was successful in tracking down the store. I'm a super sleuth. Also, that sign is fantastic. It has VHS tapes and what is either a bouquet of flowers or a pot of gold. I'm gonna go with the gold. That seems doper but either one is pretty fresh.

There was one review on Google of the store. It was from 7 years back. Let's take a look at that while we're here... 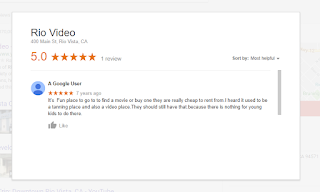 That kid wishes that there was a tanning salon still in town so that the youth would have something fun to do. Ok, that's not what I do for fun but hey man, whatever you dig, right? At least he gave it 5 stars. That's super nice.

At any rate, there you have it. Rio Video, Rio Nido California. We never knew you but of course.. T.R.O.Y....
Video Store Pics Video Store Stickers