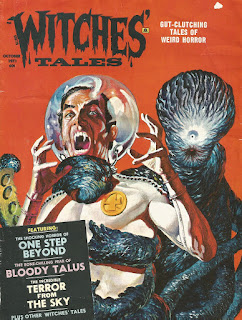 Dang! That looks like a cool magazine. Sadly, I only have the cover. Still though. It's really great. I'm not super familiar with Witches' Tales Magazine but it has Gut Clutching Tales Of Weird Horror. That is right up my alley! I wonder if the magazine is always so sci-fi based? I Maybe. The stories in the corner all seem sort of sci-fi-ish but that could have been like a special deal for this month.

That dude there that's torturing dude on the cover is super creepy looking huh? It's wild how his head sort of sucks in toward his eye and then also again into his mouth.. Yuck. He has tentacles too. How gross. Tentacles are mad gross to me. Thos suction cups on the end seem so grody. I would hate to get touched by a tentacle.

From what I can tell the mag was a black and white deal that was sort of an anthology comic type mag. Again, right up my alley..
Flea Market Magazine Scans Scans