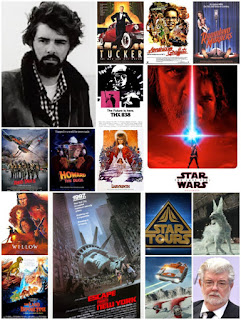 Today on GeekFest Rants, Carlos will tackle to overdue subject of non-Star Wars/Indiana Jones related George Lucas films. These are the films he directed, produced, written, or played another behind the scenes role in.  From hits like American Graffiti to bombs like Howard the Duck, we'll examine most of them.

Then for our "Posters of the Month" we'll take a look at the teaser poster for Star Wars: The Last Jedi and the classic 1981 action film, Escape From New York.

Plus we have a first hand review of the newly updated Star Tours ride which include a trip to Star Wars: The Last Jedi locations.