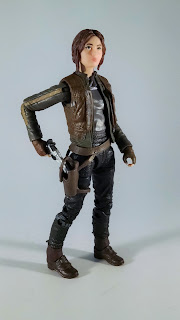 I picked up the Star Wars Black Jyn Erso the other day at Target. I'd wanted this figure for awhile but I didn't like the way that her head scarf looked. Turns out, you can take it off. I never knew. How would you know unless you bought it right?

Man, Rogue One has been out for awhile now, I mean. the next Star Wars movie is almost out, just a few months. Can you believe that? What a time we live in. Anyhow, I really dug Rogue One and Jyn Erso in particular. I liked how mean she was and how like, she was almost feral at times.

I only have like one other Star Wars Black Figure, they are like Star Wars' answer to Marvel Legends. They are a bit bigger than the standard Star Wars figure and are a bit more detailed.

I don't know why I don't have more of them. They are pretty nice. The other one I have is Rey BTW, I also want Sabine Wren but have NEVER seen her anywhere... 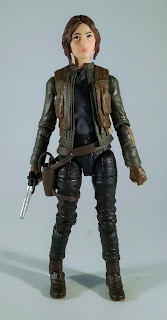 I don't know what the deal is but I almost primarily buy girl figures lately. I guess it's cause they are actually coming out with some dope, tough lady characters. That's a good thing. I like a girl hero. I honestly have no problem getting behind a female lead if she's def like Rey or Jyn Erso. Dope is dope right?

I really dig this figure. She has nice details and looks like Felicity Jones around the face. Her clothes are pretty detailed as well. Overall I'm super satisfied. Being able to take off her head scarf is great too. I scooped up a couple other Jyn Erso figures that day. I'll try and get some pics of them out to ya..
Hasbro Star Wars Toys