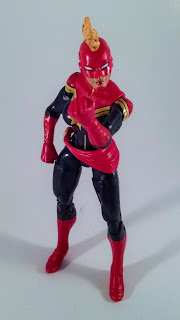 I'm a real big fan of Captain Marvel's Mohawk. I realize that it's not a real mohawk like Storm had back in the 80's. It's more like a long piece of hair that comes out of her helmet but it's still pretty def. It must look dope when she's flying about. It reminds me of like a Roman Soldier or something. I imagine that was the idea. 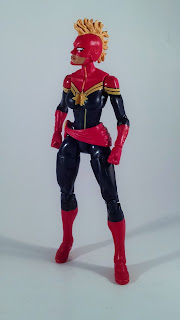 Captain Marvel isn't one of my fave characters or anything. I saw her on the shelf and she sort of spoke to me. Not literally. I just felt like I should get it. IDK, is that weird?

She's cool though and I like her outfit overall. The sash is cool and the color scheme is dope. She's like full on military in the comics. Like I think she's a Captain officially. I wonder if when that's the deal if you get a promotion does her Super Hero Name Change? Maybe and maybe not. 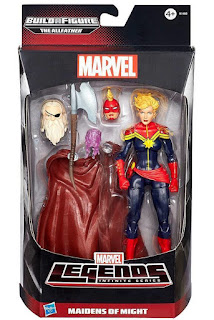 Her name is Carol Danvers right? Capt. Carol Danvers? USAF? I think. So her name is Capt. Danvers IRL and her Super Hero ID is Capt. Marvel, so my guess is that she'd stick with that name even if she got promoted to Maj. Danvers. Major Marvel does sound cool though too. This could go either way.

I wonder if it's hard to pull her hair through her helmet and make it look good. More than likely.
Hasbro Marvel Toys