I Found A Doll House Minature Toilet At The Dig The Other Day. 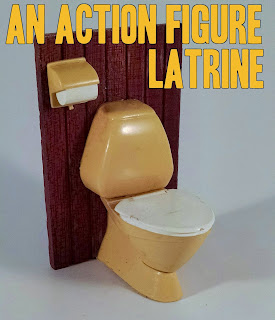 I found a doll house toilet at The Dig the other day.  I have always wanted one of these. As a youth I was fascinated with Doll House furniture. I never had any but always wanted some. The more mundane the better. I really coveted like cups and plates.

For some reason I wanted to play out scenes where my GI Joes were eating. I don't know. I really loved those little mugs that Lego Men had. They were the best.

Out of all of the doll house furniture though, the one piece that I really wanted super bad was a toilet. I don't know. It just seemed and still seemed mad funny to have your GI Joes sitting on the pot. Come on! You agree with me right? Look at this right here below us.. 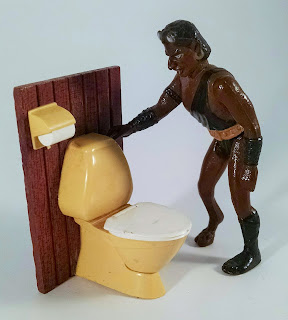 See, doesn't Calibos look hilarious examining this little bitty toilet? Sure he does. Also, I have never found a Calibos who had a tail. Never. Well, up until today I've never found a doll house toilet either so never say never. Another thing that makes this piece so great is the toilet paper dispenser on the wall. So much fun..

I'd also like one of those like plunger stick style stands that you stack the extra rolls of TP on. Do you know what I'm talking about? One of THESE!! 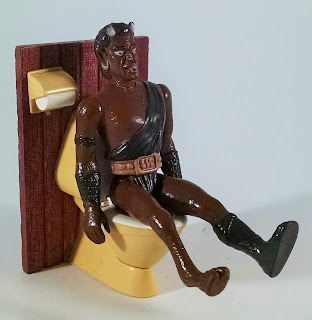 There it is. The pic you were waiting for. Calibos upon his throne. Let's imagine that his tail is dipping into the bowl. Or not, that's prolly better really.

So basically doll house furniture is the best. If you want to capture some realism in the day to day lives of your action figures, toilets, bathtubs, sinks, couches this is the only way to go.

I never really had access to anything like this in my youtful days. I don't have a sister or anyone around me who collected things of this sort. If they did though man, I'd be gaffing pieces all the times and my Joes would be having some real exciting off duty adventures involving cooking Rock and Roll's famous chili and then going number 2. There's nothing weird about that. Nothing weird at all.
The Dig Toys