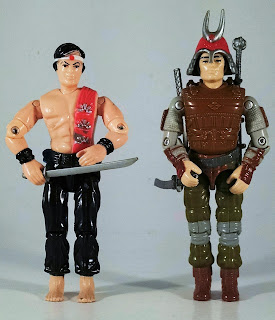 I was digging around in my GI Joe bin and these two fools caught my eye. These dudes is named Quick Kick and Budo respectively. QK is like a martial arts master and Budo is a Samurai. I didn't now and even then know what a Samurai would want to do being a GI Joe. It just seems weird, really it seems weird that there is even a Samurai in the modern world. I liked him though and he got a lot of play. Dude has some great accesories, like a sword or two and a helmet. I recall him blocking bullets with that blade of his. He just had it like that.

Quick Kick makes a little sense. He's just a dude who was way caught up in the Dojo culture of the 80's. Dude was way into waxing on and waxing off as it were. I dig that he has bare feet and some throwing stars in his sash. I don't think he was as good a fighter as Snake Eyes or Storm Shadow, not even close. I bet Zartan would beat him up as well.

Know what would be a good fight? Him VS. Biog Boa, The Cobra Boxing instructor. Style vs. Style. Quick Kick would prolly have the advantage if he worked the low kicks and maybe some grappling but I think I'd pick Boa. He just looks tougher. Sgt. Slaughter would FOR SURE Beat up on Quick Kick. Dude was tough as nails..

One wonders how QK even made the Joe squad... He wasn't the best of the best in his field. Maybe he had a good attitude and was easy to work with. That goes a long way.
80's GI Joe Hasbro Toy Pic